AKING A HEAP OF RAW INGREDIENTS and transforming them with fire and spice into a creation all your own can make you feel alive, daring and powerful. A few of Hawai‘i’s kitchen magicians extoll the virtues of going “off-recipe.”

A clean plate and a request for seconds — these are the hallmarks of a win at the dinner table. And when you’ve invited guests to dine, hearing the words, “I simply must have this recipe!” is music to a home cook’s ears. But chances are, there’s much more going on behind the scenes than dutiful allegiance to a set of instructions.

While recipes can be super useful when you’re aiming for predictability, what’s life without a little spontaneity? In food writer Philip Dundas’ book Cooking Without Recipes, he promises that risk-taking yields great rewards, challenging readers to venture beyond the shackles of scripts and see their kitchen as a playground with great potential. While there’s a certain sense of ease and security that comes with following recipes, relying on them too much can mean missed opportunities to apply your cumulative cooking skills in a creative way. For the home cooks we interviewed, the concoctions that pop out of their oven (or skillet, or crock pot) are usually one part imitation, two parts improvisation.

SOUP OUTSIDE THE BOX

O‘ahu’s Dabney Gough rarely follows a recipe on the nights she makes dinner for herself and her husband, usually in the Instant Pot, the plug-in rapid pressure cooker that’s gained a cult following for its convenience factor. Soups dominate her dinner table, she says, since, “They’re super healthy, inexpensive and there’s room for infinite creativity.”

Dabney’s ideas for soups and other inventive dishes usually come from taking an ingredients-first approach. “I have a minimalist lifestyle, so I don’t like to have too many ingredients on hand,” she says. “Maybe something catches my eye at the farmer’s market, or I’ll just see what I have at home and go from there.”

A self-proclaimed rule follower, Dabney’s culinary school background helped her to absorb the basics of cooking enough to improvise, but she still relies on the expertise of others when attempting new types of dishes. “If I’m doing a cuisine I’m not familiar with, I’ll stick to the recipe the first time just to get a feel for the ratios of spices,” she says.

Recently she went on an Indian-food-in-the-Instant-Pot kick, inspired by a Facebook group: “It was my first time doing something like this, so I found a recipe for lemon rice with turmeric, curry leaves and cashews and it came out great.” Instant Pot Lemon Rice:

Conscious of the toll meat production takes on the environment, Alethea Lai enjoys thinking up new vegetarian dishes for her partner and son to serve at their Puako, Big Island dinner table.

“When I have a lot of veggies I have to go through, I’ll make a super veggie sauce using fresh tomatoes from Kawamata Farms,” she says. “It becomes harder to make food taste good when you’re limited to vegetables, so I’m working with more spices now. We like a lot more garlic and ginger than most people.”

Though she tends to go by the book when trying something new, “I never follow recipes to a T,” Alethea insists. And while she often swaps ingredients to make her meals more local or customizes the spiciness to fit her family’s tastes, she doesn’t make a habit of skipping steps written into recipes, “… since that’s where you really build your flavor structure,” she says.

On Taco Tuesdays, Alethea likes to hand-make the corn tortillas, letting texture be her guide: “Once you know what the dough should feel like when you roll it out, you don’t forget that,” she says. For a recent dinner-and-a-movie night with the family, she looked up the Quail in Rose Petal Sauce recipe made famous in the film Like Water for Chocolate and added some fun tweaks: “I substituted the chestnuts for macadamia nuts, and the prickly pear fruit purée for local ‘ohelo berry jam. I also made my own stock from the bones of local organic chickens and sourced the roses from an organic garden in Waimea.” Quail in Rose Petal Sauce:

Ha‘ikū, Maui home cook Barry Frankel had a grand old time during the 12 intense weeks he spent at a California culinary academy in his late 20s, where he felt instantly at home in the commercial kitchen. The experience helped him acquire the techniques and confidence to be able to “wing it” in his daily meal prep today, and when he’s entertaining family and friends.

“I’ll typically look at three or four recipes and then combine them or use my own knowledge to figure out what works,” Barry says, often gravitating to meals that fit with the weather patterns. “My new best friend is the cast iron skillet. I’ve been cooking up a lot of comfort foods during the colder nights — beef stew, jambalaya, sauteéd fish with curry sauce — but as we move into summer, I’ll do much more barbequing. ” He’s also a fan of mixing up his own dry rubs to try out on meat and fish after friends gift him with various exotic spices they find while traveling.

A big part of Barry’s cooking game is the clever use of leftovers. “I took some leftover chicken soup and dumped it in my cast iron pan and threw an egg on it, scooped it out and set it onto a tortilla with some cilantro and avocado,” he says. “It was actually pretty close to this time-honored Middle Eastern dish called shakshuka. Now it’s one of my go-to meals.”

His advice for successful improvisation? “We have this natural sensibility to eat foods that are in season at the moment,” he says. “If you combine that with what’s available locally, you’re going to have better results.” Shakshuka: 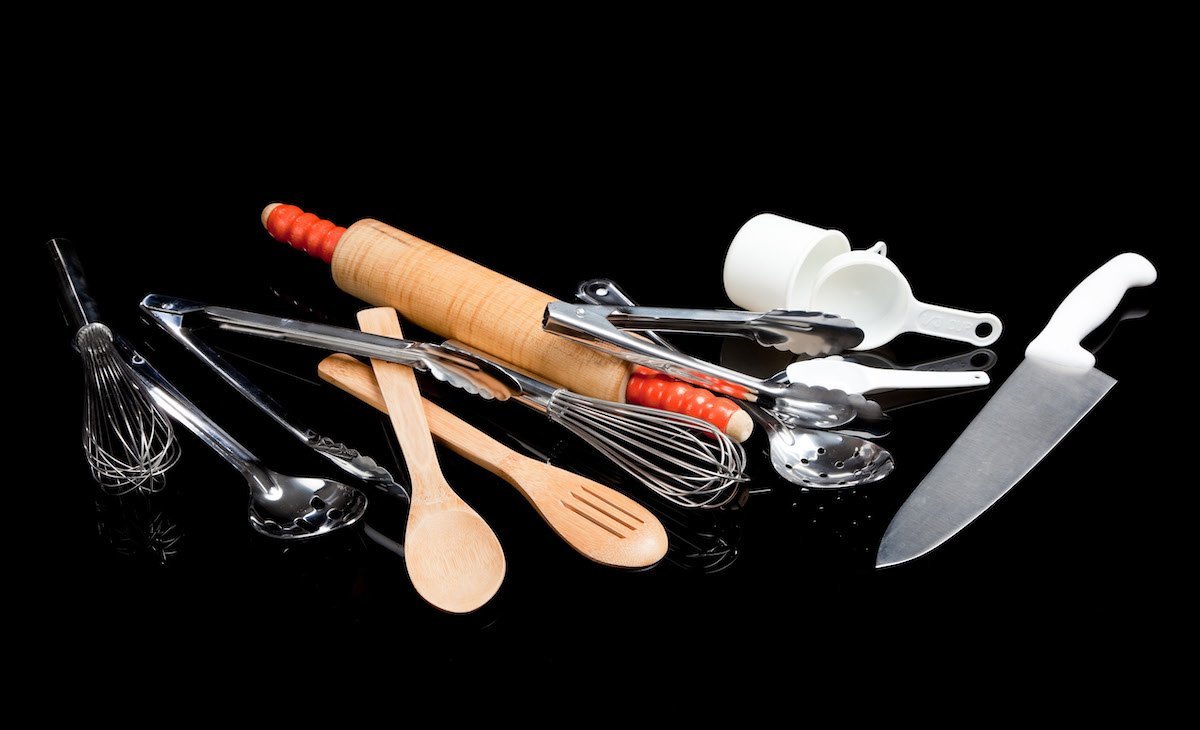 Yes, recipes are essential, especially when you’re learning the ins and outs of a new dish or testing out an unfamiliar type of cuisine. But if you’ve got visions of whipping up edible masterpieces out of thin air, you might want to invest a little time and effort into reviewing some fundamental cooking truths first. After all, legendary painter Jackson Pollock mindfully studied the principles of representational art so he could go on to literally paint outside the lines and invent a new style known as abstract expression.

If you’re more of a rule-follower by nature than a free spirit, not to worry. Becoming a better off-the-cuff cook starts with observing how heat affects food — not just learning the difference, say, between baking, simmering and sautéeing, but actually discerning how these cooking styles alter both physical structure and taste. For instance, pan-roasting and grilling are both popular “dry-heat” methods of cooking meat. But since the direct flame of a gas or charcoal grill tends to zap the flavorful fats rather quickly, roasting is often preferable for larger cuts.

Another step on the journey to freestyle cooking success is understanding the ways in which various ingredients combine to form new flavor profiles — like how garlic and rosemary complement each other nicely, or how adding an acidic ingredient such as vinegar or citrus can help bring something bland to life.

PINCH OF THIS, DASH OF THAT…

Before you take off the training wheels, pay attention to the ratios and proportions that work in the recipes you’re making. Then, instead of pulling out your measuring spoons, remember that a tablespoon is about the size of an ice cube and see if you can eyeball it. If a recipe calls for one-fourth of a cup of something, picture a large egg. Estimating measurements can be empowering and help guide you toward inventing dishes with a balanced flavor-profile. (A quick Google search can provide you with a list of visualizations.)

In Season 3 of Netflix’s makeover show Queer Eye, resident food expert Antoni gave viewers a handy “3-2-1 ratio” to nail a pie crust from scratch — three parts flour, two parts fat and one part liquid. Once you internalize rough guidelines like this, it’ll be a cinch to adjust ingredient amounts based on your family’s preferences.

You can also use your senses and intuition to guide you — evaluating smell, texture, and taste as you go along for results no recipe can deliver. Finally, our panelists offered the advice that adding ingredients gradually, frequently checking for doneness to avoiding overcooking, and “seasoning to taste” are all good anchor practices for creative home cooks.

Ad libbing a dish is not unlike composing a symphony, with ingredients, temperature and timing as your instruments. As you embark upon adventures in “cooking outside the lines,” remember the words of fantasy writer Erin Morgenstern: “You don’t have to be a chef or even a particularly good cook to experience proper kitchen alchemy: the moment when ingredients combine to form something more delectable than the sum of their parts. Fancy ingredients or recipes not required; simple, made-up things are usually even better.” [eHI] 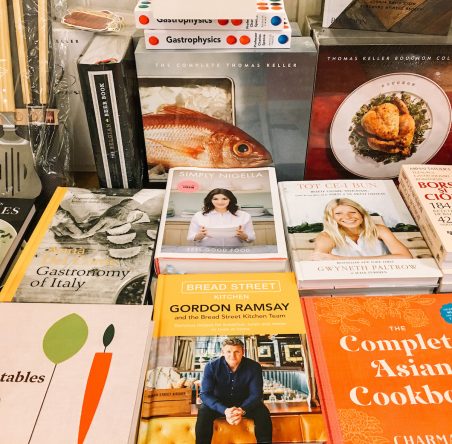 Joanie: I wing it but didn’t in the beginning. I am a super-taster, so I can usually adjust by tasting it!

Linda: I like trying new recipes that look good but I don’t have the confidence to just throw things together. I like having a format that has proportions that have already been tested.

Julia: I wing it 90% of the time… I like a lot of flavor, and I have found most recipes are boring.

Liana: When you cook often you know your flavors and what you can add take out or would work best for you. Often I will look at several recipes for the same thing and take elements I like.

Andrea: I very rarely use recipes, but it’s because I spent years following recipes, readings recipes and creating recipes as a chef/educator. That gave me the skill set to just “wing it,” even though it’s not really winging it…

Amber: Occasionally I use recipes for more authentic dishes from other places and cultures, but when I’m just cooking at home I make stuff up.

Nia: Most of the time I follow a recipe, just because when I get home from work or the gym I don’t have the brain energy to be creative. I come from a science and lab background, so I feel very comfortable following recipes, and I’m out of my comfort zone when I try to wing it.

Victoria: I usually use the recipe for inspiration and then tweak it with what I think would add more or taste better. Not all recipes are winners, and neither are my tweaks — but this is how I build my own recipes from basic chocolate chip cookies to pasta dishes.

Natalie: I often use a recipe like a template. It gives me an idea of how to measure flavors, especially in new recipes. But I almost always change quite a bit.

Aimee: I usually cook by improvisation. What do I have on hand? How much effort do I feel like making? What sounds good tonight? The exception is when I bake; it requires more precision and I know it’s pretty easy to mess up if I don’t have the proportions and chemistry right.