Tucked in a quiet corner of rural Haʻikū is a kitchen producing some of the most impressive locally-sourced cuisine on the island. Here, you are invited to pull up a chair at the prep table for a feast of the senses. A notable group of Maui culinary talent did just that recently; here’s what happened.

The chefs rolled in like a gang, excited to escape their own kitchens for a night and curious to see what the buzz was about. Jeff Scheer, owner of Maui Executive Catering, had invited them to a private dinner at his commercial kitchen in Haʻikū, Maui. Scheer’s guests hailed from the island’s top restaurants and represented the new guard: young, hungry and über-talented. One was fresh off the set of Top Chef; another had recently traveled the world with Iron Chef Masaharu Morimoto. Not an easy crowd to impress—but if the evening’s host felt any trace of intimidation, he didn’t show it. 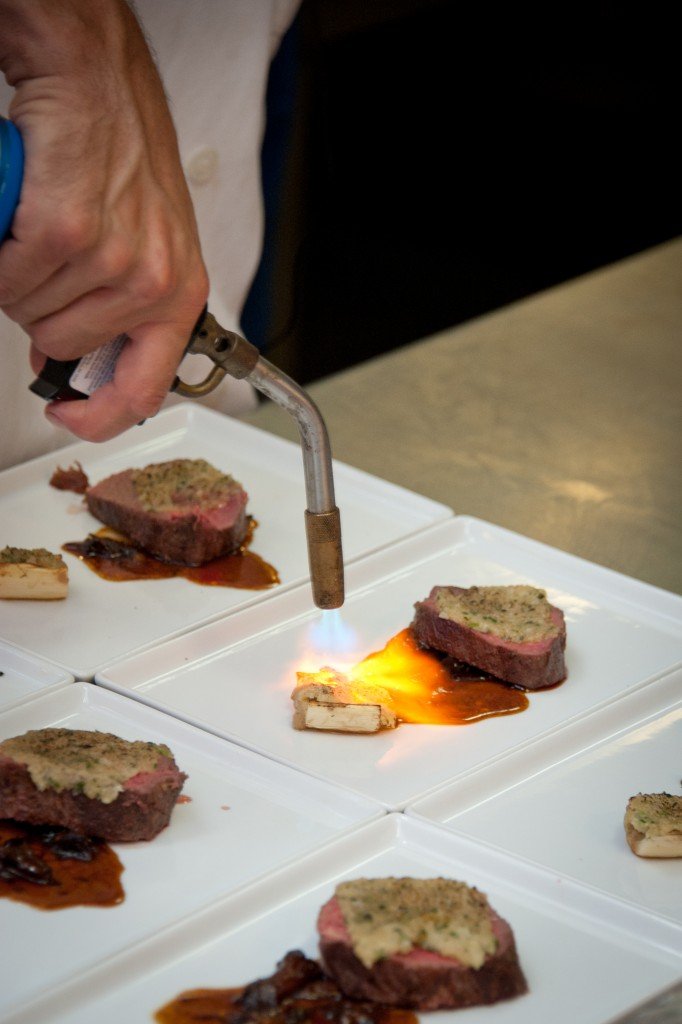 Scheer sported a spiffy chef’s coat and wild dreadlocks barely restrained by a bright bandana. He welcomed the entourage into his immaculate kitchen, where he was about to prepare a seven-course feast—live and unrehearsed—in front of them. His knowing guests eyed the machinery, the spit-shined industrial stoves, the enormous walk-in, the sous-vide cooker and the dehydrator. They took their seats around a stainless steel prep table that had been transformed with elegant place settings.

Scheer and his business partner, Jason Hacker, explained their mission: to provide next-level cuisine for catered events and to open up their kitchen for exclusive chef’s table dinners, like this one. Maui Executive Catering’s headquarters may be off the beaten path, said Scheer, but it benefits from close proximity to island farms. Everything on the evening’s menu—from the octopus to the heart of palm—had been harvested nearby.

And with that, the banquet began. Scheer produced one mesmerizing course after the next. First came a tomato water teaser, playfully studded with chia seeds and a dollop of rich crème fraiche. This acidic shot across the bow was followed by octopus crudo—a slice of edible stained glass that shimmered beneath coconut water gelée. The tender white flesh was crowned with micro mustards, nasturtiums, and rainbow radishes sliced as thin as fairy wings.

“Food is art,” Scheer said. “You taste it first with your eyes.” 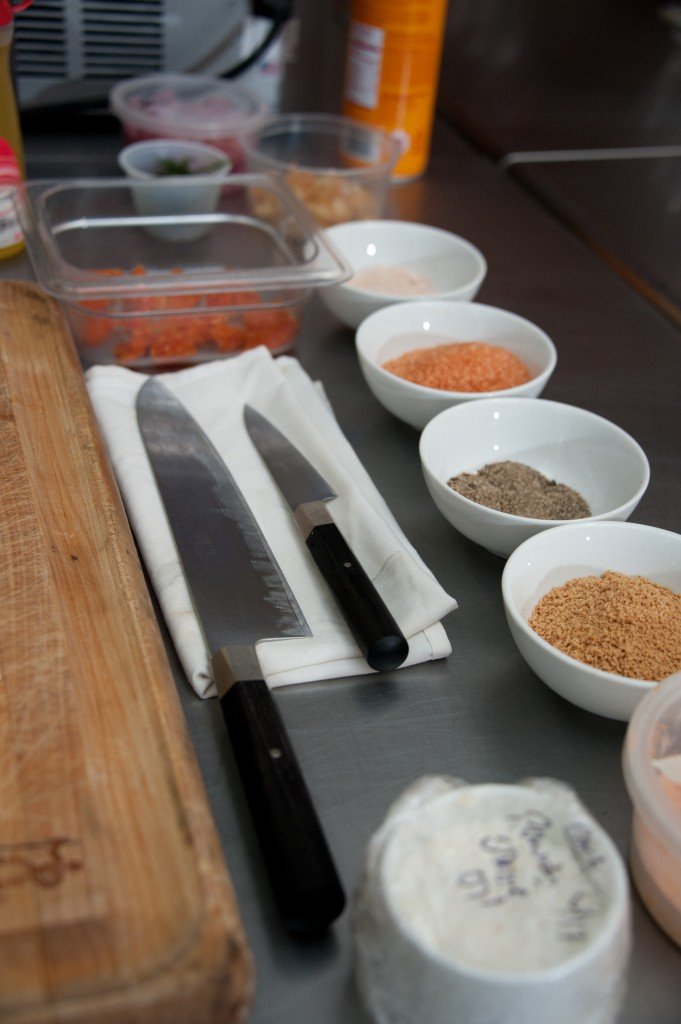 The chefs snapped photos, posting them to their social media accounts with glowing descriptions. And then they ate, murmuring and nodding as they savored each bite. Everyone fawned over the venison rillettes—irresistible shreds of braised rib and shank meat rolled in house-made granola, set on a generous smear of puréed fennel and accented with a whimsical dab of oat foam. It was a deeply satisfying dish, perhaps something Red Riding Hood’s hero would have feasted on before slaying the wolf.

Next came an organic rib eye slathered in rich bone marrow, which Scheer torch-seared into a crust. Tucked alongside was braised oxtail ragout, heart of palm and faux bone marrow in a playful bamboo “bone.” By this point, the chefs who were tweeting gave up listing individual ingredients—who could keep up? Clearly impressed, they began to wonder: Who is this guy?

One of the attendees knew the host well: Kyle Kawakami, a former instructor at Maui Culinary Academy. Scheer had been a promising student there just a few years back. After graduating in 2006, the Ohio transplant catapulted into a full-time catering career. He started out cooking for dive boats in the wee hours, in a borrowed pizza kitchen. He’s since built a brag-worthy kitchen of his own, returned to teach at his alma mater and quietly ratcheted up the standards for private dining on Maui. 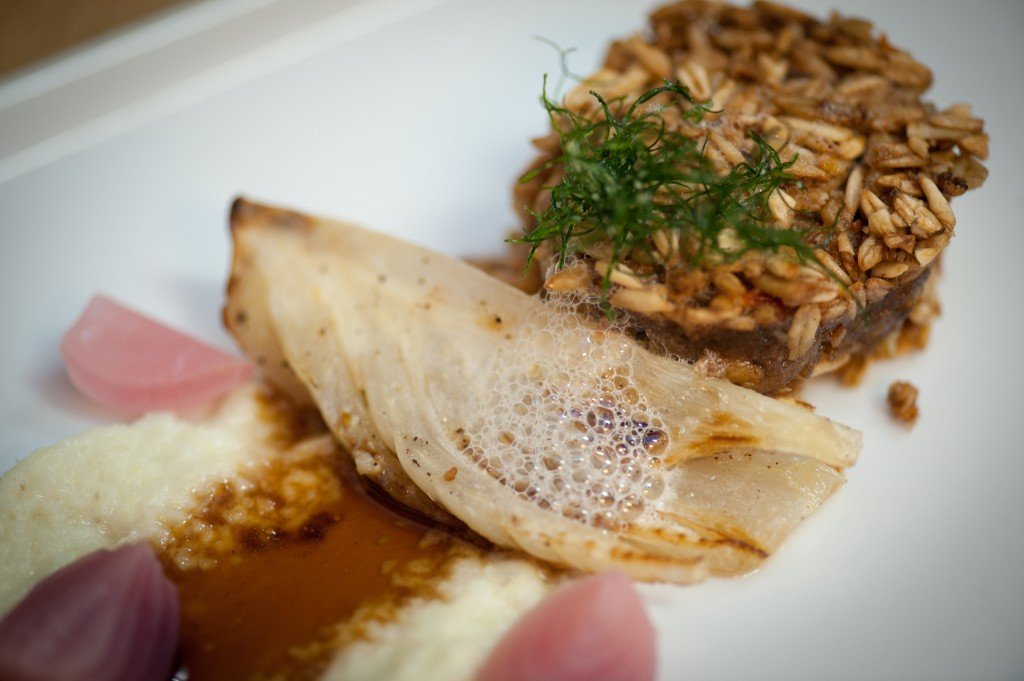 In addition to attending Maui Culinary Academy, Scheer studied at the Culinary Institute of America and “staged” (that’s chef-speak for apprenticed) at Bottega and Flour + Water in California. In Honolulu, he did stints at Mavro’s and Town. Perhaps most significantly, for two years he spent every Monday elbow-deep in the soil at Kupa‘a Farms down the road, where he grew the vegetables he’d later cook.

Hacker, a long-time friend from Ohio, joined him in 2008. “We were working around the clock for the first few years,” says Scheer. The boats needed provisions 365 days a year, so the men didn’t get a day off. But on New Year’s Day in 2010, a rainstorm flooded Kihei and the boat trips were cancelled. Rather than celebrate or rest, Scheer and Hacker rang in the New Year by relocating their business to Ha‘iku , the heart of Maui’s farmland. 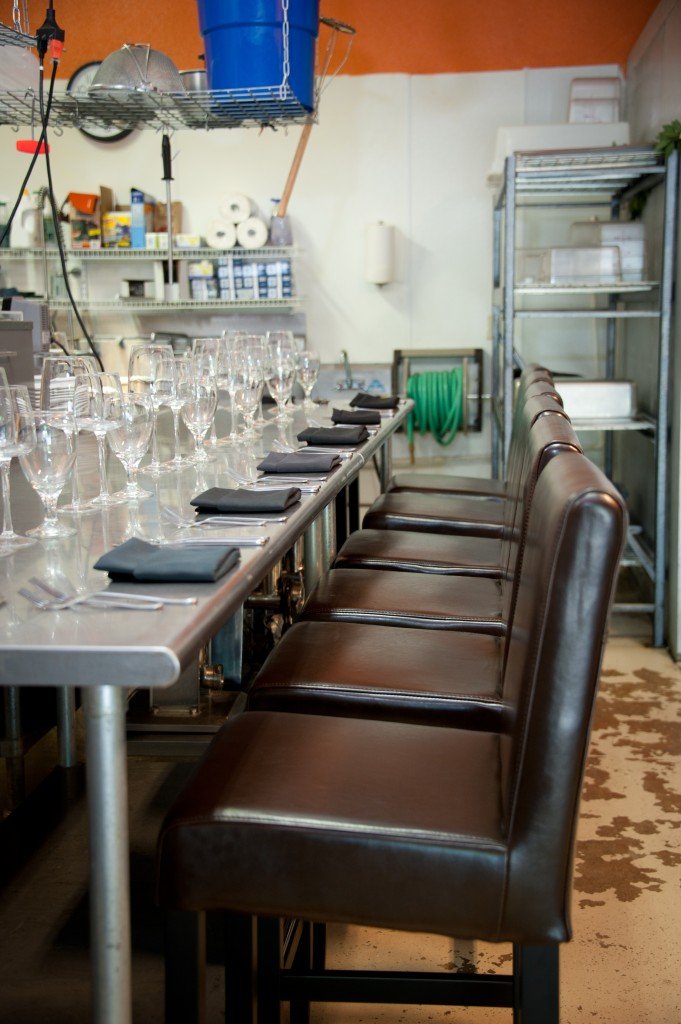 The small space in Ha‘iku Town Center was a shambles; the men transformed it into a gourmet laboratory. They painted the walls persimmon and rewired the electrical outlets to handle the commercial equipment they’d acquired. Among their investments: an enormous deck oven with steam-injection and a stone baking surface. “It cost a fortune to get it here,” says Hacker.

It was worth every penny: Scheer’s sourdough baguettes and loaves of multi-grain—made with fresh-milled flour—will make artisan bread fans weep with gratitude.

Today, Maui Executive Catering is the go-to choice for event planners with clients who are serious about food. It’s the primary caterer for Ha‘iku Mill, one of the island’s prettiest, most exclusive wedding venues. Catering allows Scheer to be more responsive than a typical restaurant chef. He can craft meals entirely around a client’s desires and neighboring farms’ freshest produce. His commitment to quality is impeccable; he makes everything from scratch. In the hinterlands of Ha‘iku , he’s crafting hyper-local cuisine that could easily compete with the most sophisticated plates in Manhattan.

A single dinner takes Scheer around three days to prepare. Often he’ll start with a Flintstone-sized slab of organic beef from Beef & Blooms, which he expertly breaks down into recognizable cuts: ribeye, short rib, chuck. He grinds the extra bits for dumplings and sliders, simmers the bones into stock and gives the scraps to Kupa‘a Farms. This semester he’s teaching Maui Culinary Academy students how to do the same: not just to carve perfect cuts, but also to purchase meat directly from local ranchers and maximize every morsel. 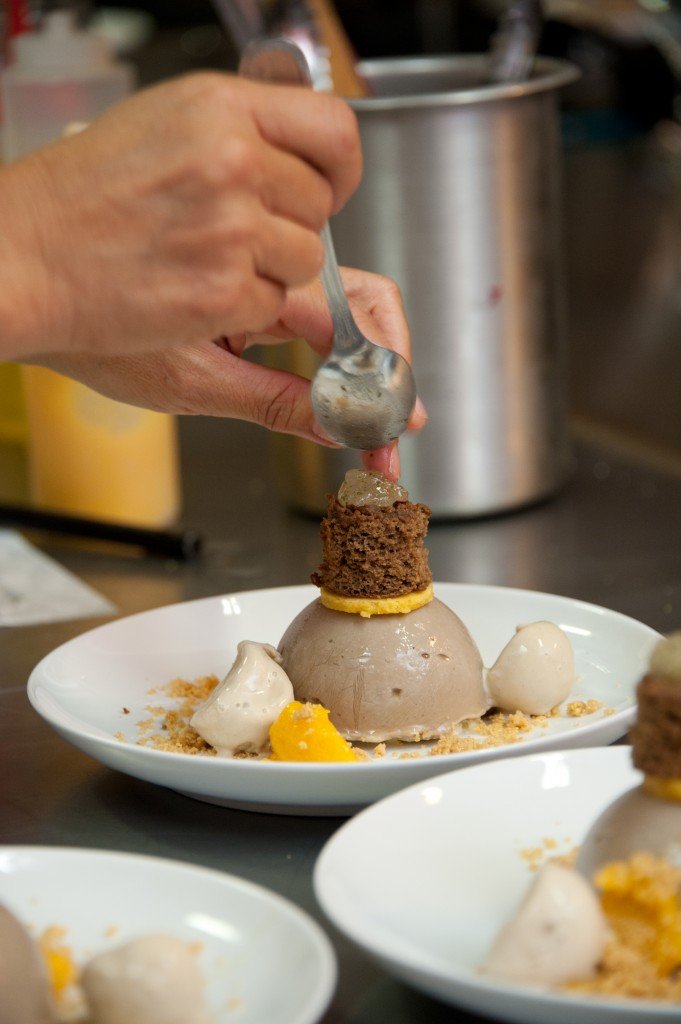 So what compelled this ambitious young chef to summon the sharpest knives on the island over for dinner? He explained over dessert—a complex affair involving fresh-spun cardamom ice cream, mint gelée, coffee cake and passion fruit leather.

“We’re all passionate and have our own styles, but I think we agree that restaurants need to change the way they source food,” said Scheer, having just served a meal that amply backed his argument. “It’s important to stay connected. One person doesn’t have that much power, but together we have influence.”

He had invited his colleagues to share his kitchen and collaborate on chef’s table dinners; their response was one of giddy enthusiasm. Everyone talked at once about raising the bar within the island’s culinary industry, rallying support for small, local farms and, essentially, starting a food-driven revolution. The evening began to take on historic overtones. What will result from this meeting of culinary minds? Impossible to say. But when a chef’s imagination is stirred, everyone’s palate wins.

To experience the magic yourself, book a seat at Maui Executive Catering chef’s table. Scheer, or perhaps one of his new comrades, will wow you with the best Maui has to offer.