1. How important is sourcing locally made oil to your business for self sustainability factor?

At Koko Head Cafe, we strive to showcase as many local ingredients as possible. The reality is there is always a cost factor, with local product sometimes being more expensive than imported commodity goods. Understand that not only are you getting the freshest product possible, you are also supporting a community member and business.  Sustain-ability and food security start with the community working together to create a dynamic and intricate web of relation-ships. I love discovering new products made here in Ha-waii, and getting to meet the people behind them. The fact that these oils are high quality and have multiple health and beauty benefits makes their value inherent.

2. How did you use the oil? Be specific to sunflower oil or macadamia nut oil.

I used the sunflower oil for sautéing sliced leeks. Tradition-ally, I use butter, haha, but I loved the result when using the sunflower oil; the leek flavor came through cleanly. I used the macadamia nut oil for roasting cabbage in the oven. The result was simple but stunning.

3. Please describe the macadamia nut oil and sunflower oil’s appearance, scent, texture, and taste, both raw and cooked. One or two word descriptions are fine. If a cer-tain quality stands out, please elaborate.

The macadamia nut oil is delightfully complex. Medium vis-cosity, fresh aroma of coffee and cacao mixed with the es-sence of a blonde raw nut. When it cooks it deepens in flavor as a macadamia nut would, becoming nuttier, more roasty.

The sunflower oil is very similar to a fresh  young olive oil with plenty of grassy and green notes. It stands up well to heat and allows whatever you are cooking to shine through flavor wise.  I would use both for raw and cooked applications.

4. Did you find anything surprising about the oils?

After doing some research, discovering the health benefits of both oils makes me reconsider utilizing these in my fats wheelhouse at home. I already use macadamia nut oil at the restaurant but this particular oil was less refined and had more character and flavor. The sunflower oil is an everyday use type for me so I’m excited to cook with it more. 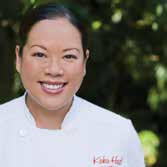 Lee Anne Wong is the chef and owner of Koko Head Cafe in Honolulu, Hawaii. A native of Troy, New York, Wong grad-uated from the International Culinary Center (ICC) and began her culinary training at Marcus Samuelsson’s Aquavit before playing an integral role in the opening of Jean Georges Vongrichten’s Chinese concept, Restaurant 66. Wong went on to work as the Executive Chef of Event Operations at ICC, during which time she was prominently featured on Season One of Bravo’s Flagship Series “Top Chef”, and subsequently was hired as the series’ Supervising Culinary Producer for the next 6 seasons. Wong has also been featured on numerous food television series in addition to star-ring in her own web series The Wong Way to Cook on bravotv.com. In 2013, Wong moved from New York City to Honolulu where she debuted Koko Head Cafe to popular acclaim. Wong released her first cookbook, Dumplings All Day Wong, in August 2014. Chef Wong continues to expand her brand across the globe, joining the culinary team for Hawaiian Airlines in 2015, and debuting Sweetcatch Poke in NYC in the fall of 2016. She was most recently named Hawaiian Airline’s new Executive Chef, with her menus set to debut in June 2018.