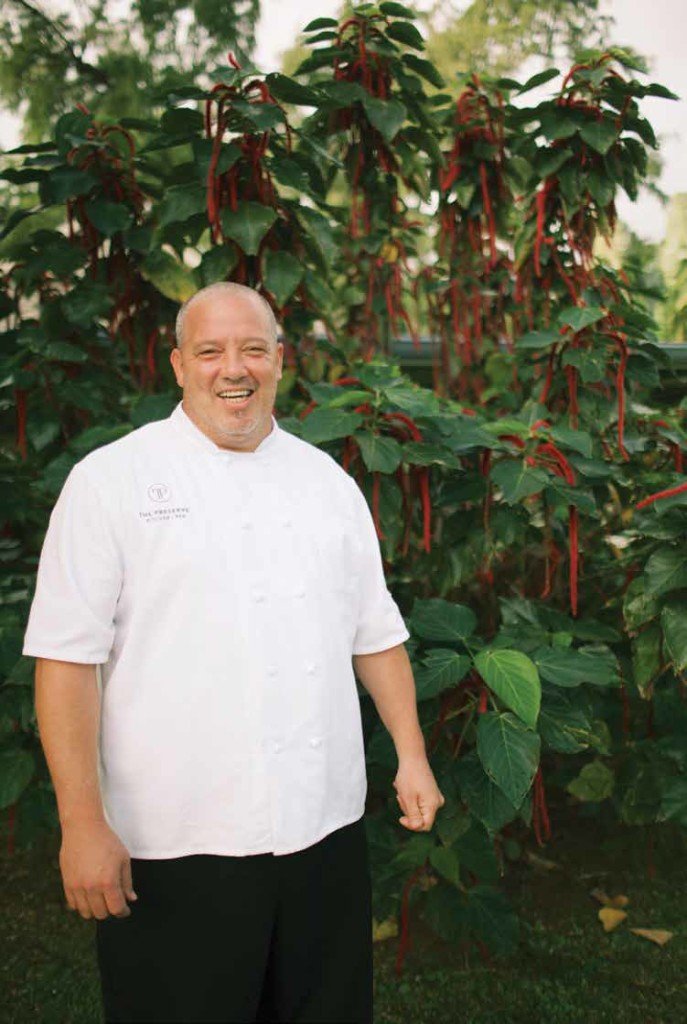 Chef Jay Johnson, a Hilo native, had never been to Maui until he interviewed for the position of Executive Chef at The Preserve Kitchen + Bar at Travaasa Hana. He probably wouldn’t have ever gone to Oahu, but his wife’s family is from Waimanalo. “Why would I ever need to go to Maui? I’m not related to anyone there,” Johnson explained, as only a true local boy can. Thus, he’s never been to Kauai, either.

Moving to a new island meant learning new things about the ingredients and cooking styles, adjusting to the Maui palates while showing them his Big Island style. “There’s more mahimahi here, while there’s more ahi on the Big Island. Even the pohole — I know it as warabi — they eat it raw on Maui. Usually we blanch it first,” he muses.

“When I first got here, I wanted to personally meet everyone — fishermen, farmers, vendors — and coordinate the menu according to what is available. One result from these face-to-face meetings is we selected to partner with Hana Ranch. We also have small farmers providing fresh fruits, herbs, pohole ferns, hearts of palm,” Johnson said. “About 75 percent of our ingredients are local and we want that percentage to grow.” His food philosophy is “keep it simple,” but make no mistake, Johnson has a very refined chef resume.

He started in the kitchen at age 16, when his mother was running the restaurant at Uncle Billy’s Kona and his brother was the chef. It was a way to keep a close watch on him, but he found he loved it. “You get to play with food every day, and put a smile on people’s faces. There’s nothing better than that,” he said.

From there he worked at several restaurants in Kona, followed by the Ritz Carlton Waikoloa and Waikoloa Village. He opened Roy’s there in the 1990s, then bounced between resorts in Hilo and Kona before landing at the Volcano House in 2013. Travaasa Hana General Manager David MacIlwraith, who previously worked alongside him at the Volcano House, recruited him to Hana in August 2015.

“I’ve done all the fancy sauces and stuff, but I wanted to go back to how I grew up, when all these pre-made products weren’t available.” Johnson and MacIlwraith overhauled Travaasa Hana’s signature restaurant menu and renamed it The Preserve Kitchen + Bar, just one of many changes in the resort’s $12 million renovation project. Here’s a look at some of his recipes.