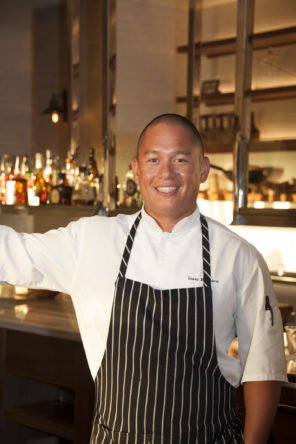 Monthly culinary collaboration for taking Hawai‘i’s cuisine to another level.

On a misty October morning on Maui, two dozen culinary professionals and enthusiasts gathered at Haiku’s Mālama Farms. The assembled group looked on with a combination of interest, excitement and— in some cases— horror.

The occasion? The dispatch and processing of ten Muscovy ducks to be used in the creation of Ka‘ana Kitchen’s Chef Isaac Bancaco’s first-ever Chef Bloc series dinner.

This statewide collaboration of chefs, sommeliers and mixologists will happen once a month at Andaz Maui in Wailea. Dinners are limited to a dozen participants and the meals focus on quality, artisanship and creativity.

“The vision involves bringing the industry together in a format where they can go ‘all out’ without volume, cost or staffing parameters,” explained Bancaco. “Moreover, from that platform we hope to provide an experience that inspires locals and visitors alike.”

Held in Ka‘ana Kitchen’s intimate Andaz Salon, the Chef Bloc series is likely to wow even the most jaded farm-to-table aficionados. 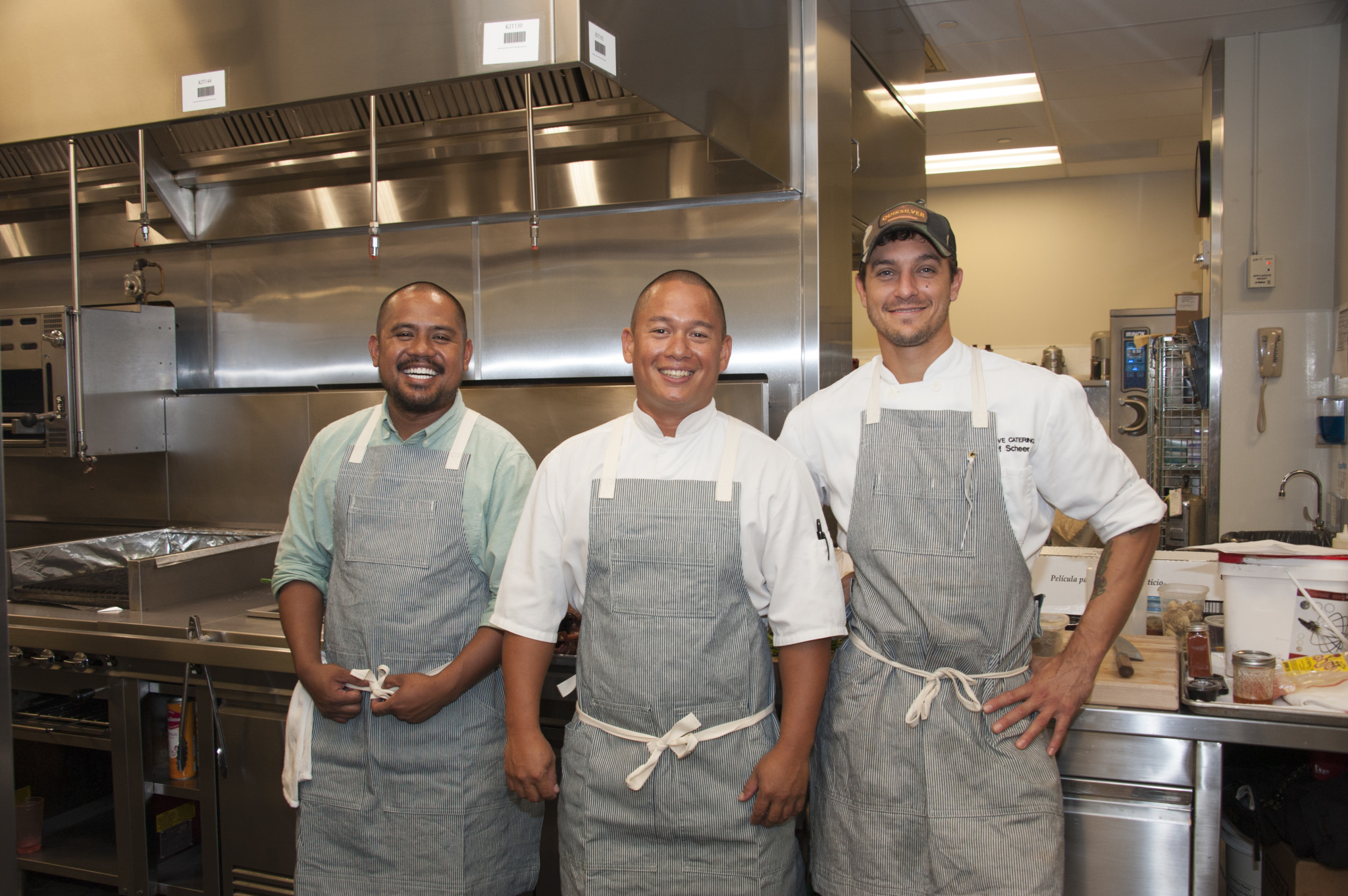 For the opening dinner in November 2014, Bancaco was joined by chefs Jeff Scheer of Maui Executive Catering and Sheldon Simeon of Migrant Maui.

Each were furnished with three ducks and encouraged to let their creativity run wild. The resulting nine-course meal featured such dishes as Duck Neck with Li Hing Mui and Shiso (Simeon) and Cured Duck Breast with Kupa‘a Roots (Scheer). It’s safe to say they lived up to— if not exceeded— expectations.

Even dessert got the Muscovy treatment with Foie and Chocolate Pots De Crème accompanied by a “Butterfinger” made from duck fat (Bancaco).

The intimate dinners are limited to a dozen guests in order to allow an interactive environment where diners can watch the process, ask questions, and even help plate the dishes. 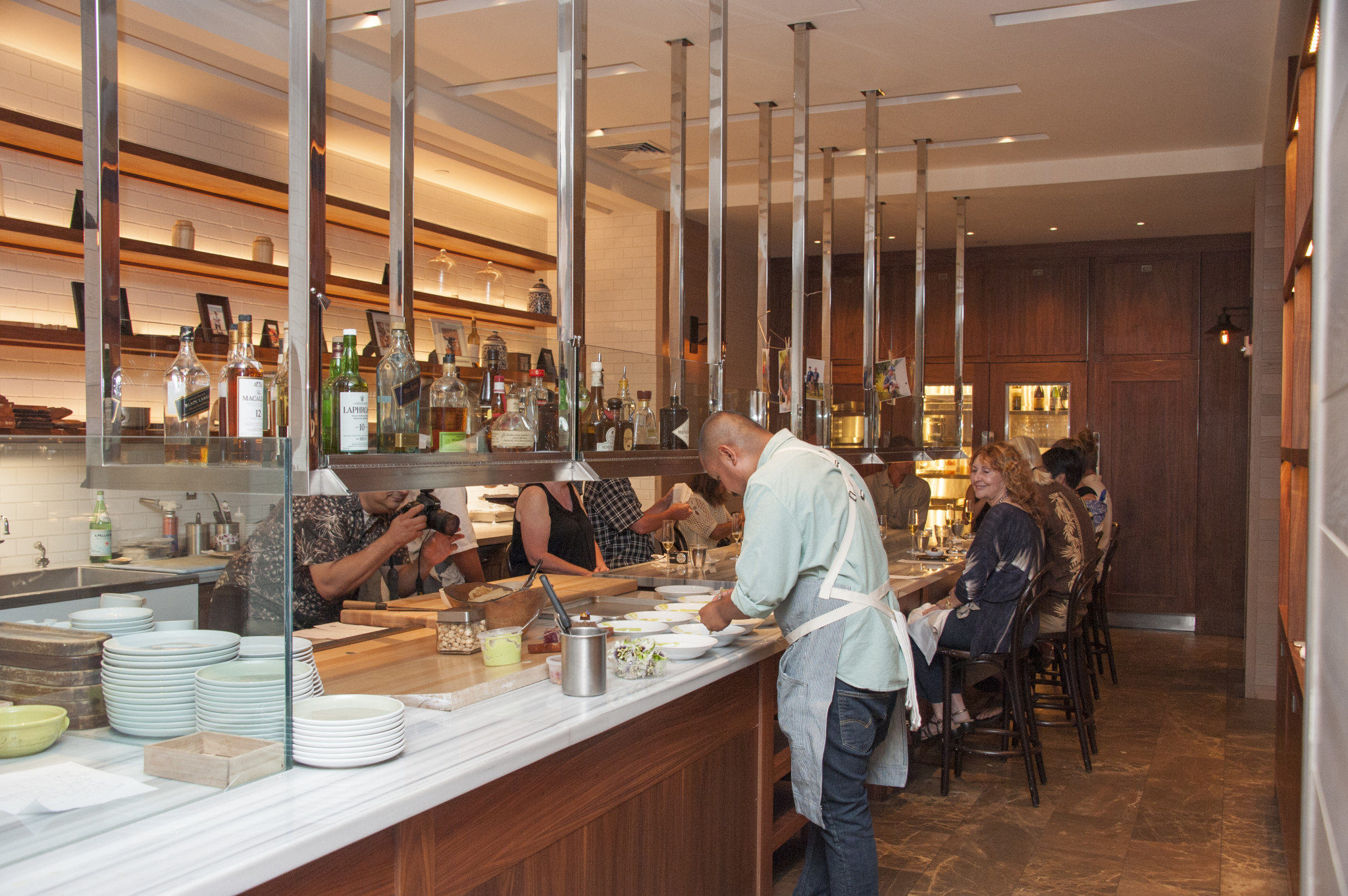 “How often do you get to enjoy a meal prepared by two or three of your favorite restaurants and have an active role in the food preparation itself?” Bancaco enthused.

The diners aren’t the only ones benefitting.

“It’s about collaboration,” he continued. “How do we make Maui’s – and all of Hawai‘i’s – cuisine the best we can? We are involving chefs who share similar food philosophies and when we come together to create these meals, we learn from one another. My hope is that statewide we start bouncing ideas back and forth and ultimately, as a result, Hawai‘i is going to enjoy better cuisine.”

Although born and raised in the upcountry Maui town of Kula, Chef Bancaco did not grow up cooking.

Rather, one of his most poignant culinary epiphanies occurred at the hands of renowned Hawaiian chef Sam Choy.

“My grandmother would take me on what amounted to grandma and grandson dates,” Bancaco chuckled. “I was in high school when she took me to Sam Choy’s in Oahu. I don’t remember exactly what I had, but I remember walking out of the restaurant and thinking, ‘It would be really cool if I could learn how to recreate those dishes and that experience.’ It opened my mind to the idea that not only can you sit down in a restaurant and have wonderful food, but you can have a great interaction with a server and an elevated experience overall.”

Travel has also had a significant influence on the chef and his culinary journey.
“Around my junior year of high school I went on a trip to Japan to play baseball. While there, I stayed with one of the players and his parents owned what amounted to a bed and breakfast. The mother would cook lunch and dinner every day, and as a result I was exposed to traditional Japanese food for the first time.” 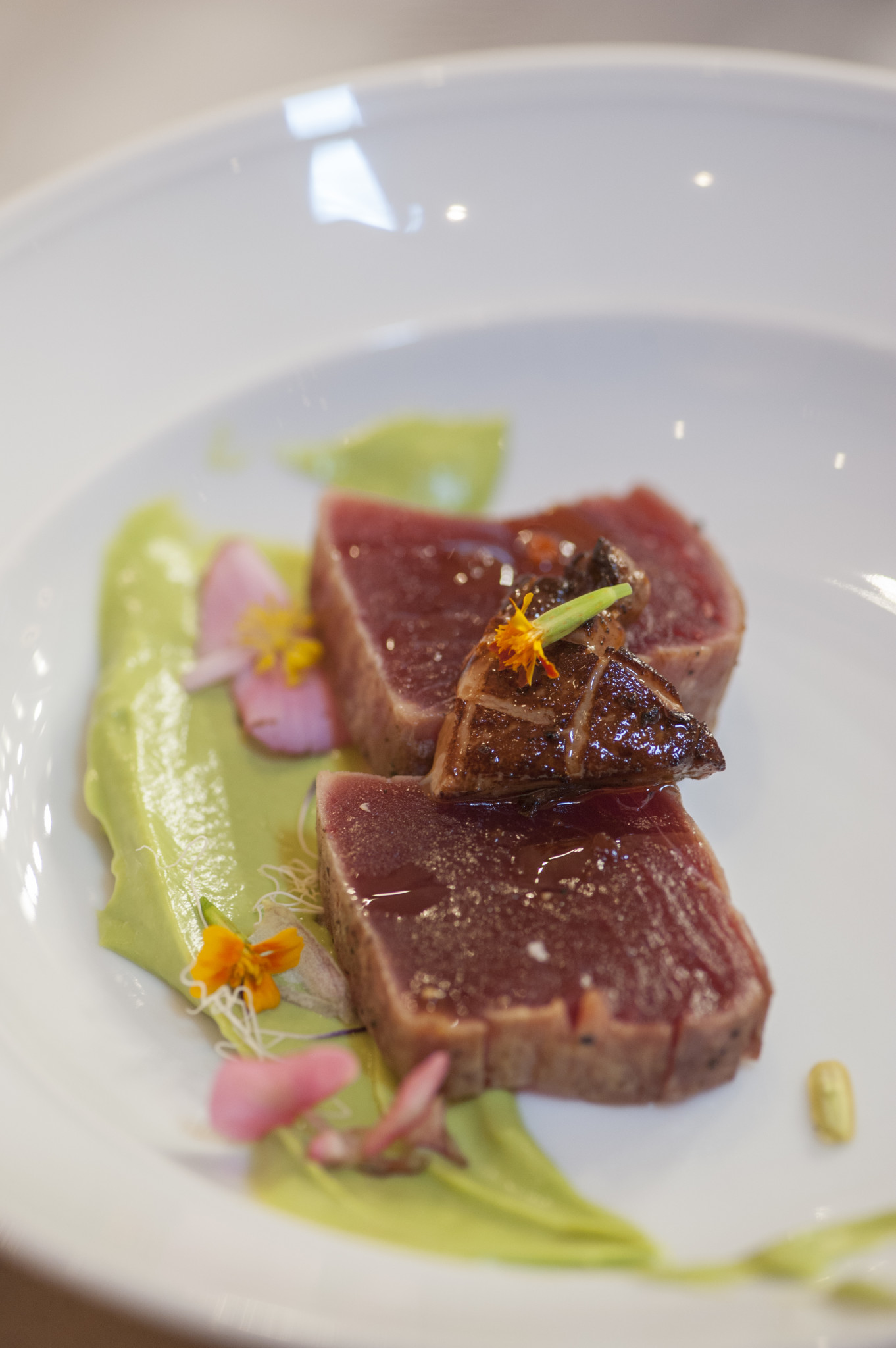 Growing up in Hawai‘i, Bancaco had been exposed to elements of Japanese cuisine, but hadn’t realized it.

“I’m five different ethinicities, but when I was a kid I didn’t know kimchi was Korean per se. Similarly, I had no idea musubi was Japanese-influenced and I certainly didn’t realize where all the components of a plate lunch came from.
Travel brought some definition to my childhood and gave context to what I’d been eating.”

This multicultural awareness can be found in Bancaco’s cuisine.

At the inaugural Chef Bloc dinner, one of his dishes presented a deconstructed Peking duck. Featuring orange peel, duck heart and shavings of aged pa’i’ai (the thick, mochi-like precursor to poi), no one can accuse the chef of playing it safe.
Similarly, his foie malasada with lilikoi sugar found the familiar Portuguese donut loaded with unexpected flavor profiles.

Moreover, Bancaco does not plan to limit upcoming Chef Bloc events to those associated with fine dining. Glancing at the 2015 schedule, everyone from food truck virtuosos to plate lunch wizards make the cut.

Although the resulting menus are likely to be as varied as the invited chefs themselves, locally sourced products will remain a feature of upcoming Chef Bloc dinners.

Future themes promise a focus on lamb, fish and even foraged products.
But will there be more first-hand bloodshed?

Perhaps, although it turns out the trip to Mālama Farms was technically an afterthought.

“We had heard of ducks being raised on Maui, specifically in Haiku,” Bancaco explained. “Initially, I was going to have them processed and just be done with it, but it occurred to me that many chefs don’t really understand where the food comes from.”

Originally limited to culinary staff, word of the field trip spread to other Andaz employees and resulted in a group of 23 participants.

“It was all about increasing the understanding of the full progression: to see the ducks alive and well and healthy and then, well, going through the procedures of processing them.

“Wasting food is a huge problem in America. Opportunities like this help us remember that what’s on your plate was once living, which in turn helps us develop a true appreciation – and a true commitment – to the food itself.”

Held the second Saturday of every month in Andaz Maui’s Ka‘ana Kitchen, getting on the waitlist for future Chef Bloc dinners is as easy as contacting the resort.