RECIPE AND PHOTOGRAPHY COURTESY OF KATE WINSLAND AND GUY AMBROSINO 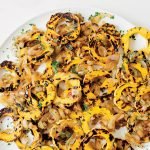 During the winter, we eat a lot of hardy squashes. Like most cooks, we usually cut them into wedges or cubes, throw them in oven until they’re caramelized and tender and call it done. During our stay in Sicily, Fabrizia Lanza made us a dish of grilled winter squash that forced us to look at the vegetable in a completely different way and showed off the depth and subtlety of Sicilian food. Cooking sliced delicata rings quickly over a grill produces squash that still has a bit of snap and a flavorful hint of its vegetal roots, one that doesn’t surrender completely to its sugary nature.
Servings: 6

RECIPE AND PHOTOGRAPH COURTESY OF CHEF HILARY BARSBY OF HEALTHYMALUICHEF.COM 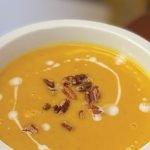 1. Preheat oven to 325 degrees, and line a cookie sheet with parchment paper.

2. In the bowl of a stand mixer fitted with a paddle attachment, or in a large bowl using a hand mixer cream together butter and both sugars until light and fluffy.

3. Add eggs one at a time and then beat in vanilla extract.

4. In a large bowl sift together flour, baking soda, and salt. Add taro chips and coconut. Add to the wet mixture in three additions, then stir in white chocolate chips.

5. Place about a tablespoon of batter an inch apart on the prepared baking sheets. Bake for 8-12 minutes until the edges start to brown. Cool on sheet about 5 minutes before placing on a wire cooling rack until cooled completely. 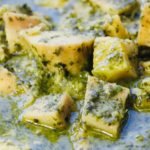 MY AFFECTION FOR SALE PEPE WAS INSTANT. In 2014, barely a few weeks into their opening, the word about Maui’s brand new Italian restaurant had gotten around swiftly. Maybe it was the spirited Italian banter between the kitchen and the servers, the intoxicating scent of garlic and herbs wafting through the space, the sacks of Italian flour or the cans of San Marzano tomatoes stacked by the counter. Who knows – but something delicious was clearly happening.

Diners flocked to enjoy dishes created by Chef Michele Di Bari and his business partner and wife, Qiana Di Bari. The couple set the bar for Italian cuisine on Maui, enriching the neighborhood and our palates in the process.

Michele rolls and cuts the pasta and pizza dough every morning. He learned the art of pasta making from his mother and was schooled at La Scuola Italiana Pizzaioli (The Italian School of Pizza). His food marries locally sourced ingredients with the rich traditions he grew up with in Rozzano, Milan and his deep familial roots in southern Italy’s Lavello and Lacedonia, where the Di Baris are currently building their dream home. The cooking is simple and honest; the end-result, superb. Kauai prawns top house made grilled crostini; arancinis rest on Maui Cattle Company Bolognese; and a fresh, local catch can be found on the special most evenings.

Brooklyn-raised Qiana manages front of the house. No stranger to building a following on the laurels of authenticity and artistry, Qiana managed one of the best hip-hop groups from the genre’s 1990’s golden era, A Tribe Called Quest, before becoming a restaurateur. Her gentle demeanor, warmth and sharp wit lend a sincere hospitality to the dining room.

Bu’ono, you might guess, is a combination of buono and ‘ono, respectively Italian and Hawaiian for delicious. The initial launch was done in collaboration with R. Field Wine Company, the gourmet and artisanal section of Foodland Farms Lahaina and Foodland Kehalani in Wailuku. Soon, Bu’ono will be available at Whole Foods Market on O’ahu and Maui, quite a win for this family endeavor.

Three types of pasta will be in production: spaghetti rigatoni, penne and strozzapreti, which literally means priest choker as it was traditionally served as an after-mass meal where the priests supposedly overindulged on pasta. Bu’ono offerings also include vibrant marinara, and a pesto sauce that highlights beautiful basil by local growers like Kumu Farms and Oko’a Farms. The fresh pasta and sauce provide a quick, wholesome and well-crafted dinner option for a family.

While Michele credits Qiana for most of the new menu specials and big-picture ideas, Qiana is quick to deflect some shine back on her partner. “We collaborate, that’s our thing,” shared Qiana. “He’s always moving, he’s never still. There’s not a lot of time for reflection. It’s hard for me to keep up with him during the day cause he’s just flying. His speed and power are really strong. But then he’ll stop in the middle of a dash, and say, ‘I remember when I was little; we would always eat panzarotti at the beach. I think I’m going to do that today.’ And he’ll come out of the blue with something epic. It is totally reciprocal.”

“We go to Italy to connect with the roots and to remember how to maintain the Italian standard,” said Qiana. “What happens in Italy is that we’ll be sitting at the most mundane table somewhere, maybe someone’s house that I’ve sat in a million times or maybe a café. And something will come out on the table and I’ll say, ‘Why don’t we show people that?’ Then we go to New York, and it gets me excited about the future.”

Last summer, he spent a birthday dinner at a farm with the family, something he hadn’t done in 20 years. Sunday suppers are called pastasciutta and consist of “slow, legacy cooking of braised meat and pasta that roots the rest of the week.” Michele’s mother would make ravioli and orecchiette, and the family would spend hours eating and enjoying each other’s company. Michele’s mother holidays on Maui at times, and when she does, she can often be seen making her own special pastas for the restaurant; it’s a sight to behold.

“We work hard because we see how much people love it,” said Qiana. “We are motivated by our community, the locals and the visitors, but we want to get excited too. We want to be titillated by our creative process.”

1. Boil potatoes with the skin on. Once cooked, peel and slice them small.

2. Snap both ends off the green beans, wash, and boil them in salted water for 1 minute. Drain.

3. Cook spaghetti till al dente. When draining the pasta, save some of the cooking water.

5. Drizzle with EVOO and serve immediately. 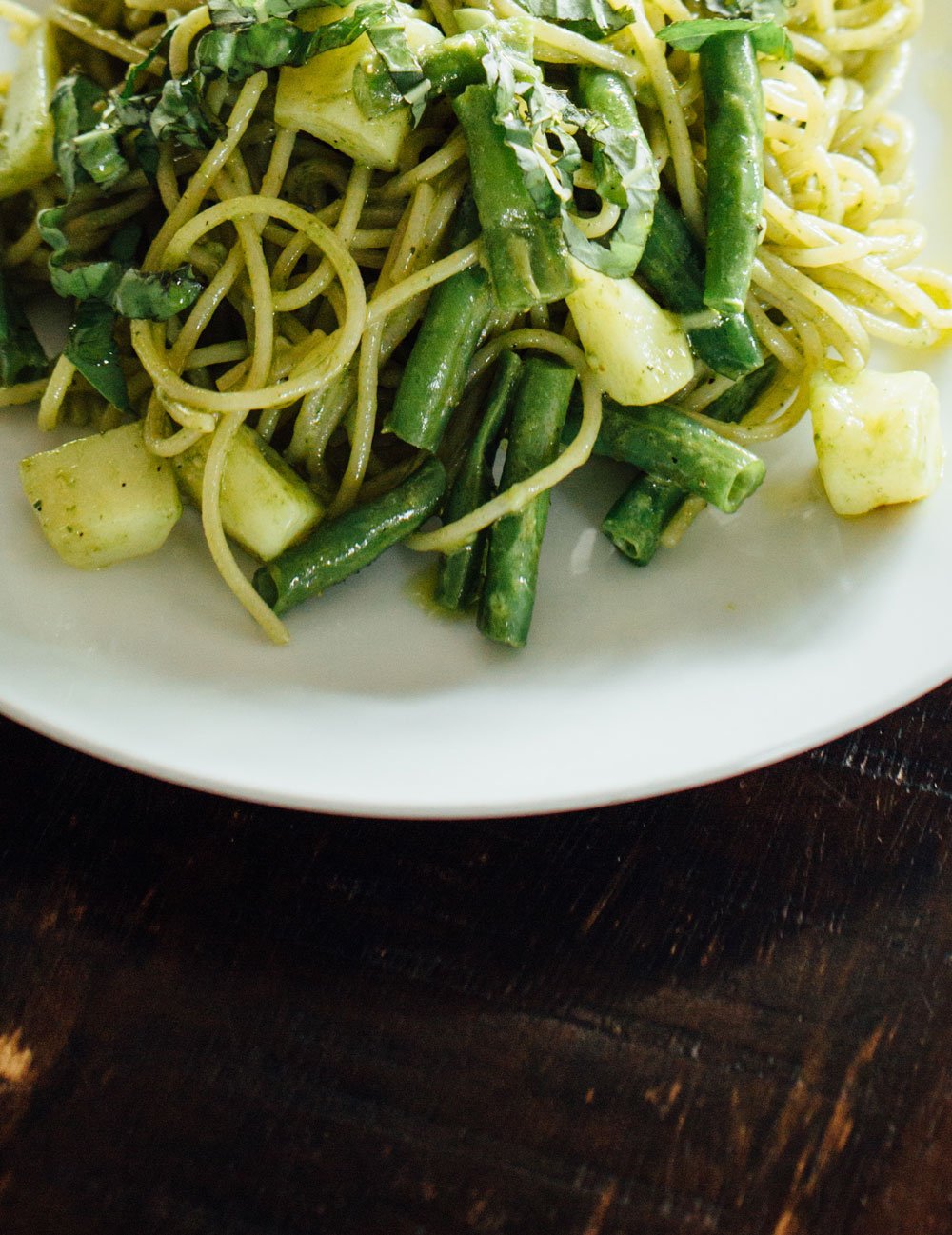 ¼ cup vinaigrette, made with extra virgin olive oil and red wine vinegar, plus more as needed

2. Put the rice and all the vegetables in a large bowl. Drizzle with vinaigrette and use two big forks to combine. Add the Grana Padano cheese, tossing gently to separate the grains.

3. Stir in the parsley, taste, and adjust the seasoning or moisten with a little more vinaigrette. Serve at room temperature or refrigerate for up to a day, bringing the salad back to room temperature before serving. 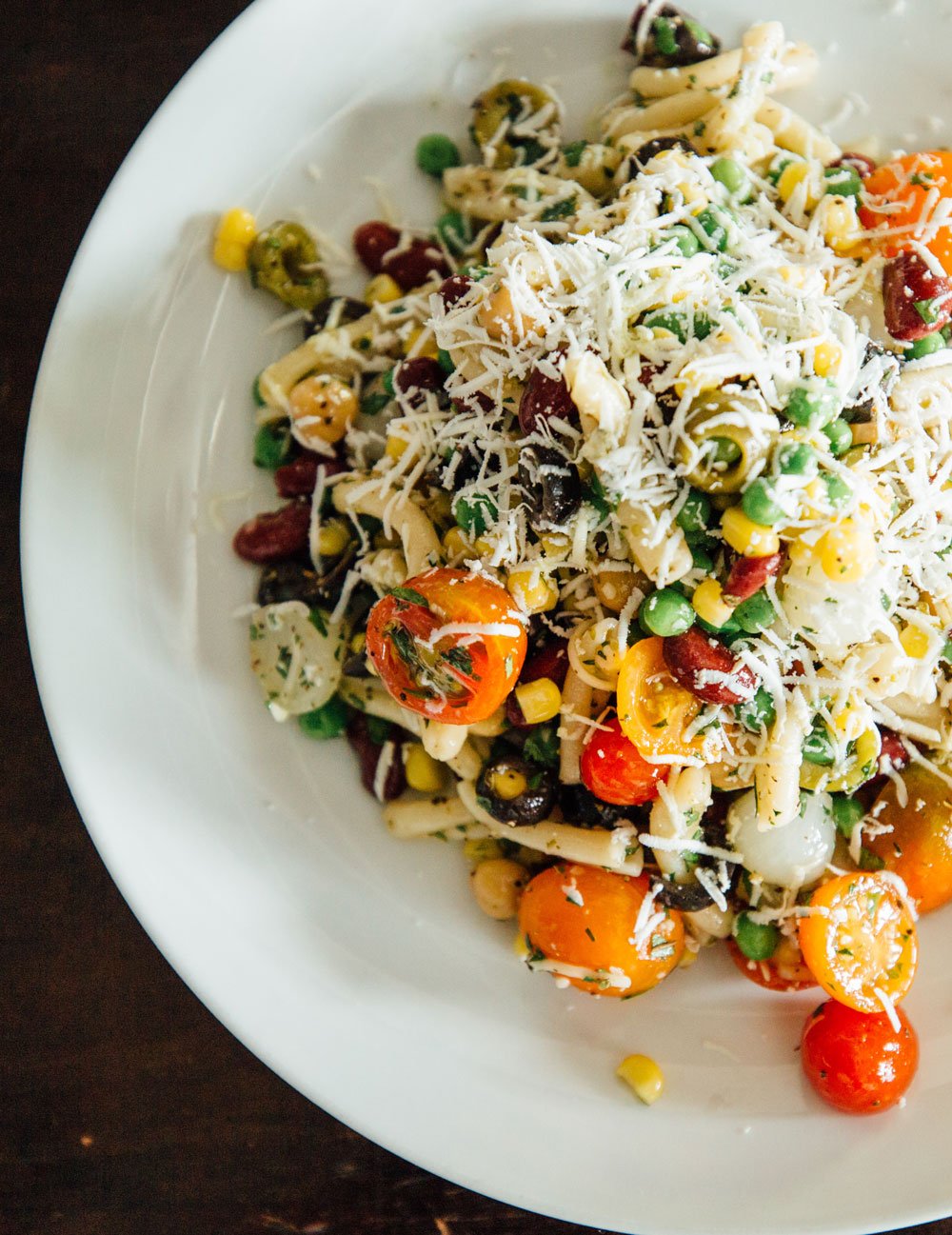 1. Slice the eggplant about ½ inch thick. Cook in abundant olive oil, without crowding, sprinkling with salt and adding more oil as needed. You will undoubtedly have to cook in batches; take your time and cook until the eggplant is nicely browned and soft. Remove to a plate. Meanwhile, put a large pot of water on to boil and salt it.

2. After cooking the eggplant, the pan will ideally have a couple of tablespoons of oil left. If there is more or less, drain some off or add a bit. Turn the heat to medium. Add the garlic and onions and cook until the garlic and onion color a little bit. Add the tomatoes, oregano, and basil along with some salt and pepper; cook until saucy but not too dry, stirring occasionally. 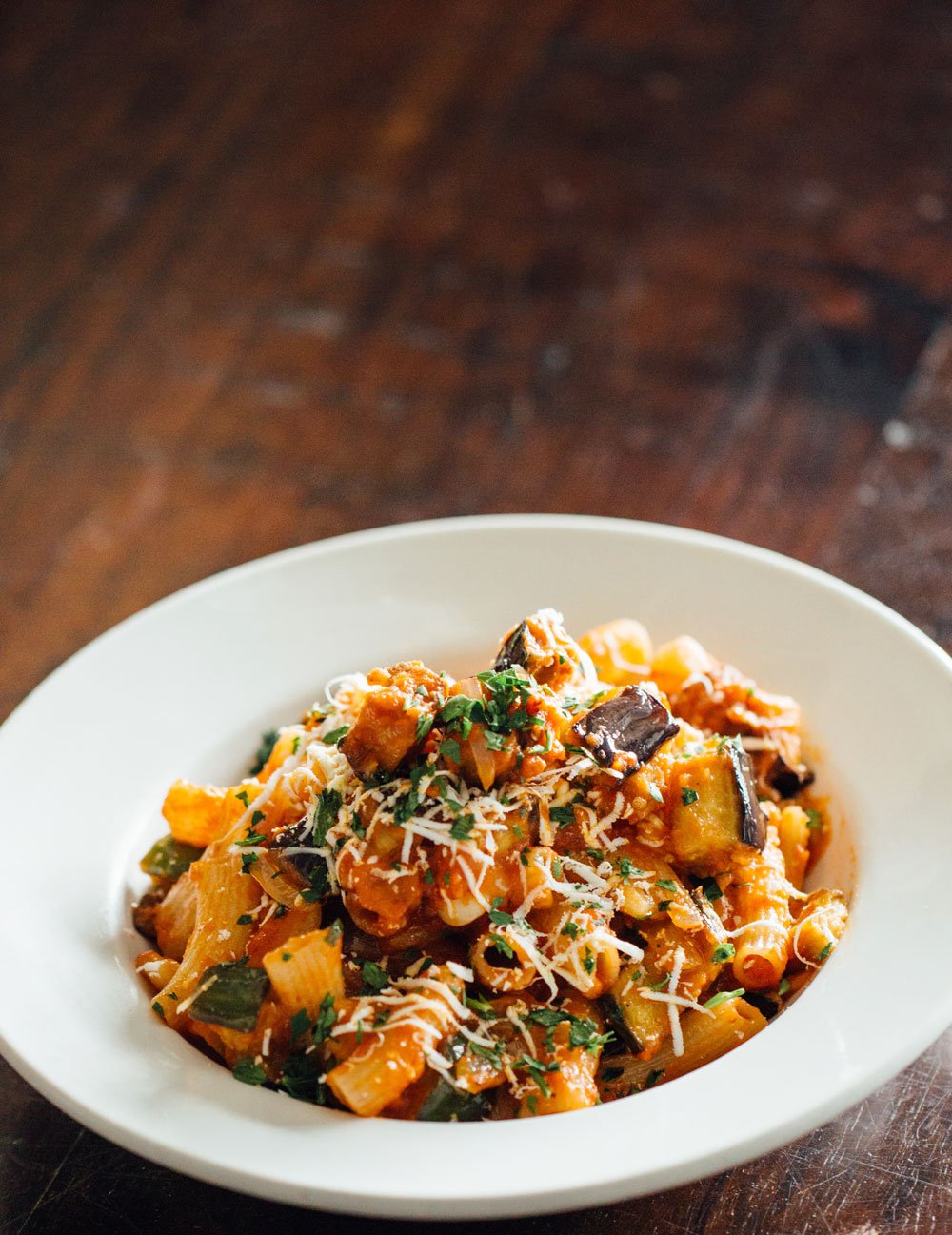 1. Heat the oven to 400°F. Bring a pot of water to a boil. Drop in the onions and blanch for 30 seconds. Drain well and run under cold water.

2. When cool enough to handle, peel the onions and trim the root ends, dropping the onions into a mixing bowl as you work. Add the olive oil and season with ½ teaspoon salt and several grinds of black pepper.

3. Arrange the onions in a single layer in a medium baking dish and put in the oven. Roast until tender and lightly browned in spots, about 30 minutes.

4. Meanwhile, fry the bacon in a small skillet over moderately high heat, stirring from time to time, until crisp, about 8 minutes. Using a slotted spoon, scoop out the bacon and transfer to a paper towel–lined plate to drain. Keep any fat that remains in the skillet.

5. Return the skillet to the heat and add the vinegar, mustard, sugar and ¼teaspoon salt, stirring to dissolve the sugar.

6. Pour the hot dressing over the roasted onions, along with the crisped bacon. Toss everything gently together, garnish with the parsley and serve warm.

1. To make the dough, combine the flour and ¼teaspoon salt in a bowl and, using your hands or a pastry cutter, quickly work in the butter, squeezing or cutting it until the floury mixture is filled with pea-sized lumps.

2. Drizzle 3 tablespoons ice water over the mixture and stir together with your hands or a fork until it will just hold together when squeezed. Add the remaining water if you need it.

3. Gather the dough into a ball and flatten slightly, then wrap well in plastic wrap.

4. Refrigerate for at least 1 hour and up to 2 days; the dough can also be frozen for up to 1 month.

1. Peel the onions, neatly trim the root end and cut them lengthwise into ½-inch wedges, keeping the root end intact so they hold together.

2. Heat the olive oil in a skillet over moderate heat. Arrange as many onion wedges as will fit in a single layer in the skillet and season with salt and pepper.

3. Cook the onions, without stirring or moving them, until the bottoms are nicely browned, about 5 minutes.

4. Spoon the onions onto a plate, taking care not to break them up, but not worrying about it if you do. Repeat with the remaining onions.

5. Combine the scallions and goat cheese in a bowl and mash together with a fork until very well combined. Season to taste with salt and pepper.

1. Heat the oven to 400°F. Line a baking sheet with parchment or a Silpat.

2. Roll the dough into a 12-inch round on a lightly floured countertop, then transfer it to the baking sheet.

3. Spread the goat cheese mixture evenly over the dough, leaving a 2-inch border. Arrange the onions, browned sides up, over the cheese, then fold the edges of the dough over, pleating as necessary.

4. Bake the galette until the pastry is golden brown, about 40 minutes. Remove from the oven and serve warm or at room temperature.