A new look at butchery in the Hawaiian Islands 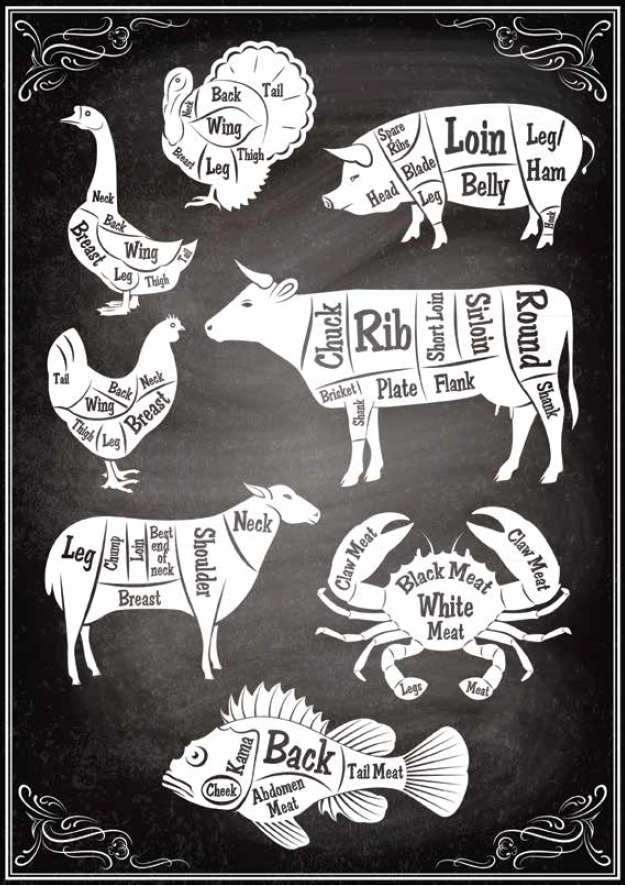 It’s often said that everything old is new again and this is especially true with the surging interest in locally sourced meat and the art of butchery. Just a few generations ago small butcher shops could be found all over Hawaii, but over time people’s relationship to food and buying habits changed.

“There used to be three butcher shops in Kohala, three in Waimea, plus another three in Kona on top of three to four in Hilo,” says Mills Stovall, owner of Waimea Butcher Shop, one of two new butcher shops that recently opened on Hawai‘i Island.

It’s a sentiment echoed by Frank Kramm, chef and co-owner of Kona Butcher Shop. Kramm grew up in Honaunau and remembers going to the small local butcher shop at Greenwell Farms where his family bought meat from local ranchers. “Then they closed about 19 years ago and Safeway and other big box stores came into play.”

“We’ve lost that relationship to where we get our meat from,” adds Stovall. “We go to the farmers market and talk to people about where our fruits and vegetables come from, but not our meat.”

Not since the rising popularity of farmers markets has there been such a food shift and it’s hitting all the main Hawaiian Islands nearly simultaneously. In addition to the two new Hawai‘i Island butcher shops, VJ’s Butcher Shop on Oahu, itself only a few years old, is opening a franchise on Maui in 2017. And last March, Hanai Kauai opened in the old Kojima Store in Kapaa. While Hanai Kauai isn’t a butcher shop, (it’s a full service market of locally sourced food), co-owner Adam Watten says local meat sales account for roughly a third of their business and they plan on opening a butcher shop within the store in the next year or two.

These new businesses join Makaweli Meat Company on Kauai, Maui Cattle Company, and Pono Pork on Oahu, which provide meats for restaurants and butcher shops around the state. Maui Cattle Company works with several ranches, butchering and processing beef, and selling prepackaged meats in retail outlets. Makaweli, which works with Ni‘ihau Ranch and Maui Nui Venison, doesn’t sell retail, but people can order custom meat cuts directly from them, which they’ll FedEx to you the next day. Pono Pork works as the middleman with ranchers, butchers and processors on Oahu to provide pork primals to restaurants and institutions – the company provided 2,000 pounds of pork to the chefs participating in the 2016 Hawaii Food and Wine Festival.

While it may look like a new trend, the new butcher shops have been years in the making.

“Anyone that’s opening a butcher shop right now, they’ve been working hard for years and years waiting for the right moment,” says Robert McGee of Pono Pork, himself a veteran butcher. “We have so much opportunity here right now with so many fantastic ranches.”

“I’ve been wanting to do this for about the last seven years,” says Kramm. “One of the first things I said to [co-owner and fellow chef] Connor Butler when I met him was that Kona needed a butcher shop.” The two men have been laying the groundwork for the Kona Butcher Shop since 2013. For his part, Stovall has also been planning his butcher shop for several years and it just so happens that both businesses opened within a month of each other.

“The truth of the matter is that people care more and more about what they put in their mouth now,” says McGee.

Response to customer demand is what led Jenny Gaffer and her husband Justin Javier to open a butcher shop in Haleiwa when they moved back to Oahu in 2011. Jenny says the couple sought out non-GMO “clean meats” and foods when they moved to Oahu. They opened a food truck and demand was such for the Molokai beef and venison they served that they opened a separate butcher shop soon after.

One of the benefits of butcher shops is increasing sustainability in the islands.

“Back in the day, chefs would get a whole animal and have to break it down in their kitchen,” says Jehu Fuller, general manager of Makaweli Meat Company.

“The chefs understand, they know that the animal has more than a middle section; it has legs and shoulders,” says Fuller.

“It’s more sustainable because we use the whole animal,” adds Fuller. “You don’t just use the rib eye and the tenderloin. You have to find ways to use the shanks, bones, even the tongue. That’s what makes butcher shops so special because you can get any kind of meat or bones.”

Stovall has taken the concept one step further with the goal of being a zero-waste butcher shop. “ We’re using 100% of the animal.”

“We offer soup bones, smoked sheep bones for dogs, even dog closed treats. Meat bones we can’t use, we turn into bone meal. We even have artists that want to use some of the bones for carvings.”

McGee sees sustainability in another way, working with pigs because they do not require food brought in from beyond the islands and unlike cattle, do not need to be sent off island for finishing. McGee also teams up with farmers using natural practices. As a wholesaler and distributor, he works with Mountain View Farms in Waianae Valley on Oahu, which specializes in raising pigs using the Korean Natural Farming method.

“I work with Mountain View because of the way they raise their pigs, they’re great pigs. Mountain View Farm is the largest farm using Korean Natural Farming in the state.”

Renewed interest in buying locally sourced meats has led to an increased appreciation for the art of butchery and hunting practices in Hawaii.

As a life-long hunter, Stovall points out that there’s a tradition of self-reliance in Hawaii. “There are tons of families that don’t buy meat because they share a cow or because uncle can hunt. We’re trying to make it easier for people that don’t hunt to get access to these amazing products.”

Even though he learned how to butcher as a hunter, Stovall says he does not consider himself a butcher and is working with a fellow hunting partner, who is a master butcher.

“I don’t plan on calling myself a butcher for a long time. I’m a chef that has a butcher background.”

The same is true for Hanai Kauai. Watten buys meats from several local ranches, including bison raised in Hanalei and pigs from Oama. Since the ranches sell only the whole animal, Watten teamed up with a local butcher who comes in and prepares the meat cuts, which Hanai then sells packaged within the retail store.

“We have a great butcher, Adrien Pu’u, that comes once a week,” says Watten. “Adrien grew up immersed in cattle ranching and hunting. He’s well versed in animal husbandry and butchery and is a consummate professional.”

Last October, Hanai Kauai offered a five-hour class on the art of butchery with renowned butcher Francois Vecchio. Watten notes that the class drew 12 attendees, including local chefs, hunters, and novices wanting to learn how to cut their own meat.

VJ’s on Oahu regularly offers workshops to school groups showing kids how to make their own hot dogs, made up of only five ingredients and local spices – even the hot dog and sausage casings are GMO-free. Interest in butchery has reached such a point that at last year’s Taste of the Hawaiian Range, one of the largest agricultural events on Hawaii Island, organizers offered a free workshop on how to butcher half a side of beef.

At the heart of the butchery trend is knowing where your food comes from, be it venison from Molokai, lamb from Niihau, chickens from Hawaii Island, pork from Oahu or beef from a nearby ranch.

“We aren’t saying eat steak every day,” says Stovall. “If you have a steak once a week make sure you get it from a local butcher shop and know where it came from.”

“The opportunity is here in spades,” adds McGee. “There’re a lot of good ranchers in Hawaii with so many fantastic ranches. [As butchers] we have a responsibility to deliver a wholesome, quality product consistently.”