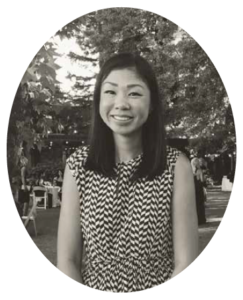 Jennifer is thinking about a pink box. It sits inside a refrigerator within a childhood memory, filled with leftover Chinese pastries. She smiles as she describes her favorite one: long and hotdog- shaped with a coconut and butter filling. Sometimes, there’d be savory treats inside like cha siu bao, a steamed and filled bun that you could wrap in a damp paper towel and throw in the microwave. If, when morning came, the pink box was there, that was breakfast. If it wasn’t, Jennifer would fix herself cereal or toast with butter or preferably, peanut butter and condensed milk.

Although she enjoyed frequent home cooked traditional Chinese dinners with her family, Jen’s parents had no time to cook breakfast. Her father worked late nights as a bartender, catching sleep in the mornings, and her mother’s day-shift began at 4AM. Both of Jen’s parents are originally from China. Her father, born in Guangzhou, a southern province, moved to Hong Kong and then to California in the 1970s but soon returned home to find a wife. Her mother was nineteen when she married and was brought to Oakland to start a new and unfamiliar life. Jen was born a few years later in Hercules, California, where the family lived until 2002 when her parents moved to Kailua on Oahu. Jen followed them there after attending college in Berkeley and then living briefly in San Francisco. Jen now lives on the same property as her parents, raising her own family with husband Nik Lobendahn. Together, they spend their days cooking breakfast.

Over Easy is not a big space. Tucked down a footpath off a main Kailua throughway, Kuulei Road, there are regularly clusters of hungry patrons lined up along the bordering white picket fence. The routine is simple and regulars know it well: add your name to the list, once your party is complete and has been called, find yourself either at a table on the flora-lined lanai or inside the open-kitchen restaurant, perhaps at the bar where you can order a lilikoi mimosa or a scratch Bloody Mary and watch the good work get done. Over Easy’s menu is in ways unconventional; the Brunch Bowl is composed of house-made yogurt, avocado, tomato jam, micro greens, spinach and two “7-minute” eggs. Mixed together with a big spoon and spread atop toasted house sourdough bread, the curious combination of elements creates a new spectrum of flavors and textures. But it is perhaps the Kailua Eggs that most excites the fusion-fueled breakfast goer. A large bowl of rice, diced Portuguese sausage, two eggs however you like and a bacon cabbage broth, poured table-side, creates a dish reminiscent of Chinese breakfast staple, congee.

“It’s like a congee, a rice porridge, but the rice isn’t cooked long enough or with enough water,” says Jen, “Or it’s like ochazuke, but instead of pouring tea over the rice, we pour broth.” Or, in other words, it’s like nothing else.

In 2008, Jen went to China for a few months of travel, winding through different regions, starting in Hong Kong and making her way all the way north. She remembers breakfast being distinctive in every region she visited, always fresh and sold on the side of the street. Handmade dumplings filled with pork and chives in Bejing, hand pulled wonton noodle soup in Hong Kong — “Different kinds of noodles, different kinds of meats, everywhere we went,” Jen explains. She fondly remembers buying fresh soy milk from street carts, warm and served with or without sugar, maybe with a savory fried donut alongside to dip. The most common thread throughout the country was baozi, the perfect quick breakfast food item for people on the go.

For Jen, it’s important to keep Chinese food traditions alive in her family. Her mother still cooks big communal meals once a week, working with passed-down recipes and speaking Chinese all the while. Jen still turns to congee when she’s under the weather (a super thick version with ground beef, ginger and shoyu,) and every year, after Thanksgiving, she makes a batch with the leftover turkey bones. “Really good jook [congee], it comes from the bones,” she says. Her mother still buys boxes of manapua, but now they’re from Char Hung Sut in Honolulu’s Chinatown and come in white boxes with a pink stamp and a red ribbon.

But the culmination of Chinese food traditions for Jen and her family is Dim Sum. “The Chinese have known about brunch a lot longer than Americans have,” Jen smiles. Local Dim Sum mainstays like Legend on Beretania Street start to really fill up between ten and eleven each morning. As Jen describes it, Dim Sum is family- style eating, ten people to each big round table, lots of red and gold, lots of yelling in Chinese. Everyone has a small cup of tea. Women behind carts of steaming food trays zig zag through the room, shouting their fare, Ha Gow! (dumpling), Cha siu bao! (pork-filled bun), and Feng Zhao! (chicken feet).

“There’s fried stuff, baked stuff, steamed and pan-fried stuff, sweet and savory,” says Jen. Tickets are stamped throughout the meal based on what and how much food each table receives. The end of the meal is always marked with a fight about who gets to pay and sometimes a sneaky stealing of tickets. Usually after Dim Sum, everyone will migrate to a family or friend’s house for further socializing.

For so many families living in the melting pot which is the Hawaiian Islands, food is more than simply sustenance, it is a ritual, a recollection of flavors and aromas, a tribute to where we came from and where we are now. In a land of pineapples and poi, almost 6,000 miles from their roots, how extraordinary it is for families like Jen’s to walk through the streets of Chinatown, to sit down among kindred at Dim Sum and feel exactly at home.