edible Hawaiian Islands is more than just a magazine, it is an ohana (family). An extended family comprised of the production team, writers, advertisers, and readers sprinkled across the islands and beyond Hawaii’s shores united in a passion about food, whether it be growing, farming, fishing, or cooking it.

Readers of edible Hawaiian Islands also know that each cover strongly reflects Hawaii and its local foods with an emphasis on the issue’s theme. With the theme of DRINK for our 2018 Fall issue, it seemed a natural fit to feature the Bolton ohana, founders of Kona Coffee & Tea on Hawaii Island.

Celebrating their 20th anniversary, Kona Coffee & Tea is truly an ohana run company and one of the few Kona coffee farms that grows, mills, and roasts single-estate coffee, meaning all the beans come from a single farm. It’s also a multi-generational business founded by Jan and Dan Bolton with two of their grown children, Malia and Danny, managing the day-to-day operations of the company (daughter Kirstina lives on the mainland.)

It all started back in 1996 when Dan and Jan jumped at the opportunity to acquire former ranch land in Kona called Waiono Meadows. Already running a construction company called Bolton Inc. and living in the Kona coffee belt, it seemed natural to get involved in growing coffee.

Deeply rooted in their faith and their desire to help the Kona community, on a wing and a prayer the entire family, including the kids and extended relatives, lent a hand and planted 20 acres of arabica typica coffee in 1998.

“We saw coffee as a way to help preserve the small town that we love,” says Jan.

Within two years of harvesting and roasting their first crop of coffee cherry, the Bolton’s were winning coffee cupping contests.

“When we won first place in the Kona Coffee Cultural Festival Cupping Competition [in 2002], we knew we had something,” says Dan.

Indeed, it’s been a steady climb up the ladder of success ever since. In 2003 they opened their first retail location near Honokokau Harbor. Ten years later they acquired a location in the Kona Coast Shopping Center previously occupied by Starbucks and after a year of renovations, opened a café.

In the meantime, their coffee continued to rack up awards, including First Place in the 2009 Gevalia Crown Cupping Competition.

But the family’s focus has always been on more than just growing coffee or winning awards says Kelly Drysdale, director of logistics for Kona Coffee & Tea. Cultivating community and promoting local businesses is a top priority for the Boltons. Every month they feature the beans of another Big Island single-estate coffee farmer in their cafe. They source as much as possible from other local businesses, from the focaccia bread in their deli sandwiches to beers from local breweries. They even give their coffee grounds to local pig farmers for compost.

Looking toward the next 20 years, the Bolton ohana wants to continue to grow and diversify the coffee farm with new technologies while supporting the local economy.

“I’m beyond grateful to my parents for having a vision and not being fearful of the risk,” says Malia. “It’s amazing to see years of hard work pay off. I’m excited for what’s to come.” 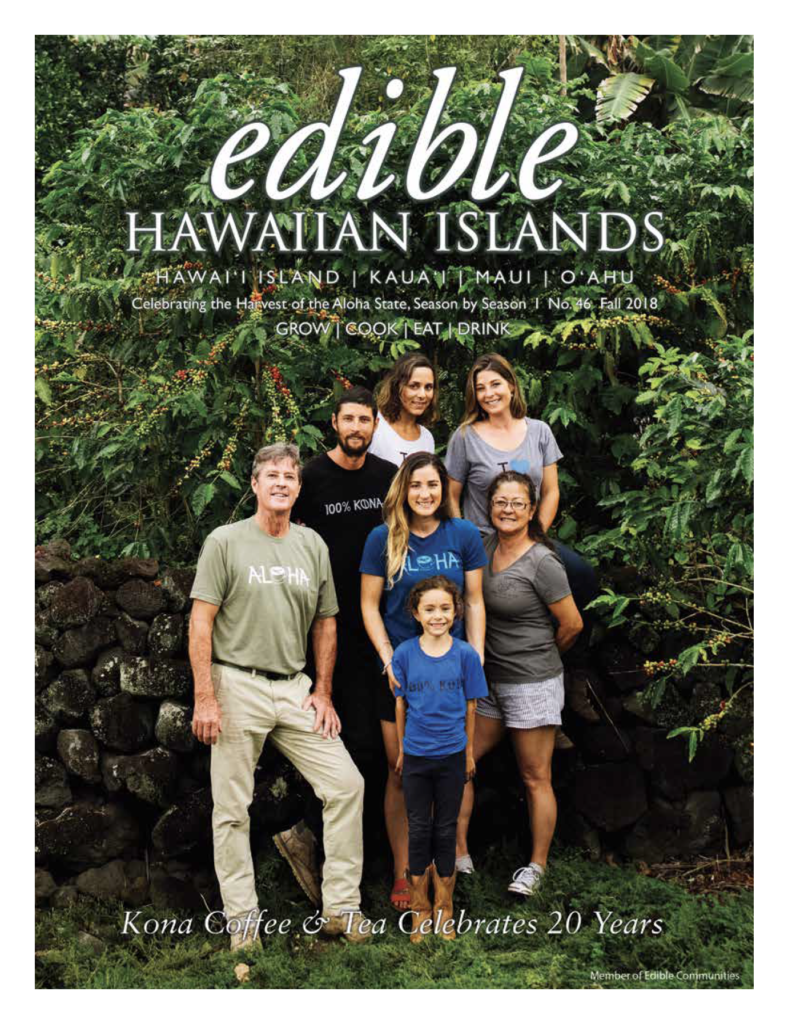