The intoxicating aroma of freshly baked bread mingles with the scent of kiawe smoke, as members of the Maui Portuguese Cultural Club pull golden loaves from a stone oven in Kahului. It’s the club’s monthly baking day; a way to raise funds for scholarships and club activities. The all volunteer crew produces dozens of loaves, using an old family recipe and an oven that could have been found in an Azores village or a Maui plantation camp more than a century ago.

Portuguese families first arrived in Hawai‘i in the 1880s, bringing with them from the islands of Madeira and the Azores a cuisine that featured their soft, white breads still popular today. The women of these families generally baked once a week in a community wood-fired oven.

According to Club President Laura Paresa, ethnic cooking was the one thing plantation bosses allowed immigrant workers to pass down, noting that when students applying for Club scholarships are asked what it means to them to be Portuguese, most write about food. Paresa believes there is much more to a culture than its cuisine, but it is food—their famous bread—that supports the Club’s efforts to move beyond cuisine in order to revive forgotten aspects of their culture.

The Club’s oven sits on a lawn at one of Kahului’s Hale Mahaolu housing complexes. Founded in 1968, the Maui Portuguese Culture Club began baking bread to help raise funds for the maintenance of the Portuguese casa, fountain and garden at Heritage Gardens, the ‘Ïao Valley park celebrating Maui’s radiant multicultural population. The Portuguese section of the park was designed by its founding members, including then-mayor Elmer Cravalho, and the Club’s Portuguese bread and bean soup were a favorite treat at the old Maui County Fair, (before the fairgrounds near the Kahului Safeway closed in 1988). When the Club attempted to move their oven, it fell apart.

Mayor Cravalho insisted a new Portuguese oven be built at Hale Mahaolu‘Akähi, the first independent living complex for Maui’s elders, and so the bakers moved with it. They use the oven once a month, along with the little kitchen off the complex’s craft and recreation area, a shaded lanai with tables and plenty of room for bread making, cooling and packaging.

Baking day starts the night before. Most months, club member Greg Perreira arrives to start the fire,using kiawe wood he has collected and cut to fit the oven. Either Perreira (napping in a tent he pitches the lawn) or Paresa (dozing in her car) monitors the fire through the night. 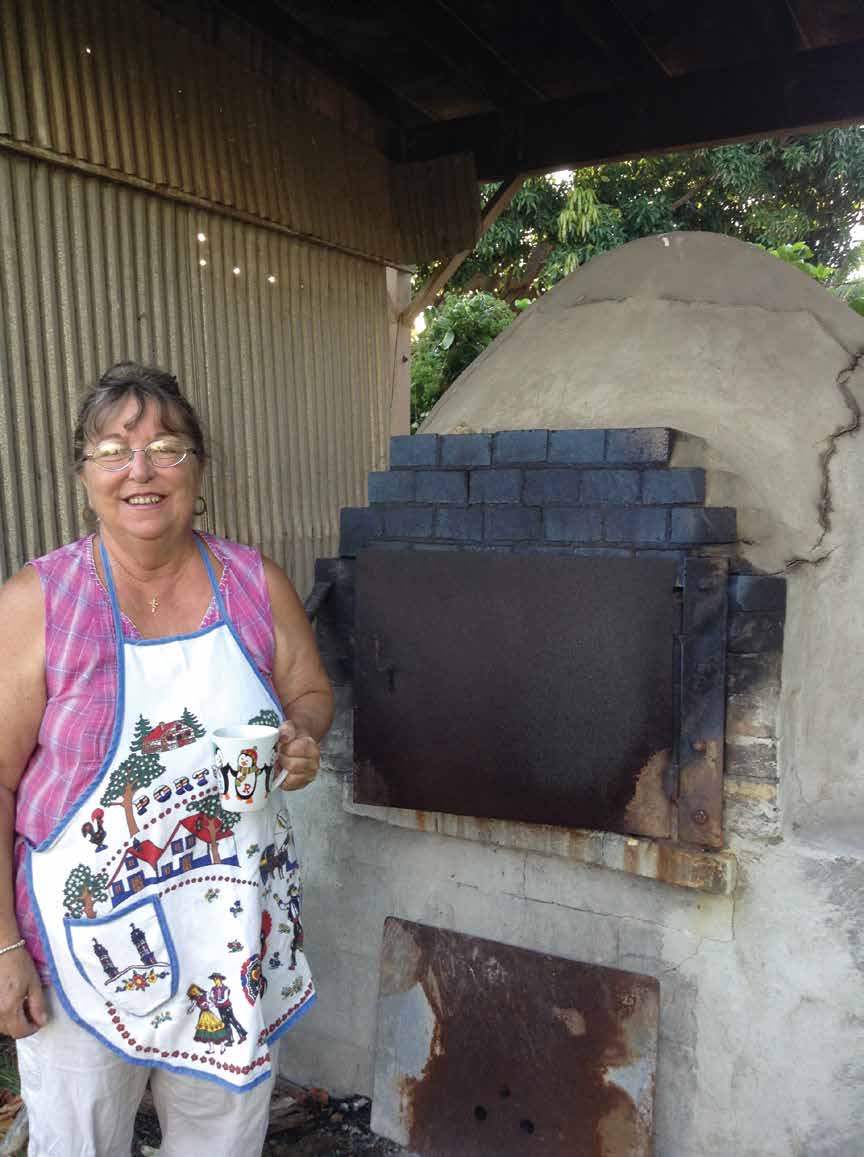 The kiawe burns within the oven’s dome, whose walls reach temperatures as high as 1100°F. The bakers scoop out the coals, clean up the oven, and leave the door open to cool it to no more than 700°, judging the temperature by tossing flour on the oven floor to see how quickly it browns. Coals left at the front of the oven help to maintain a stable temperature.

The bakers arrive at 6 a.m. to start the masa, dough that will rise into a cushiony mound in a large stainless-steel bowl. Chief baker Yvonne Aoki learned to make bread from her father, former president of the club and its baker. “He would be running back and forth” between his mixer and the oven, but with enough helpers (including her husband, Paul), Aoki can focus on filling the giant bread mixer to make dough. When the dough has risen, Club Vice President Lorraine Evans pinches off big chunks, weighing and setting each into greased pans.

Now the club members all pitch in, rolling out chunks to form loaves, sometimes sprinkling dough with a mix of cinnamon, sugar and raisins, then rolling up the loaf to create a sweet swirl. With other portions of dough, they form seven small rolls—traditionally, one for each day of the week— and set them all into a round pan. These loaves come out of the oven looking like puffy little golden crowns. 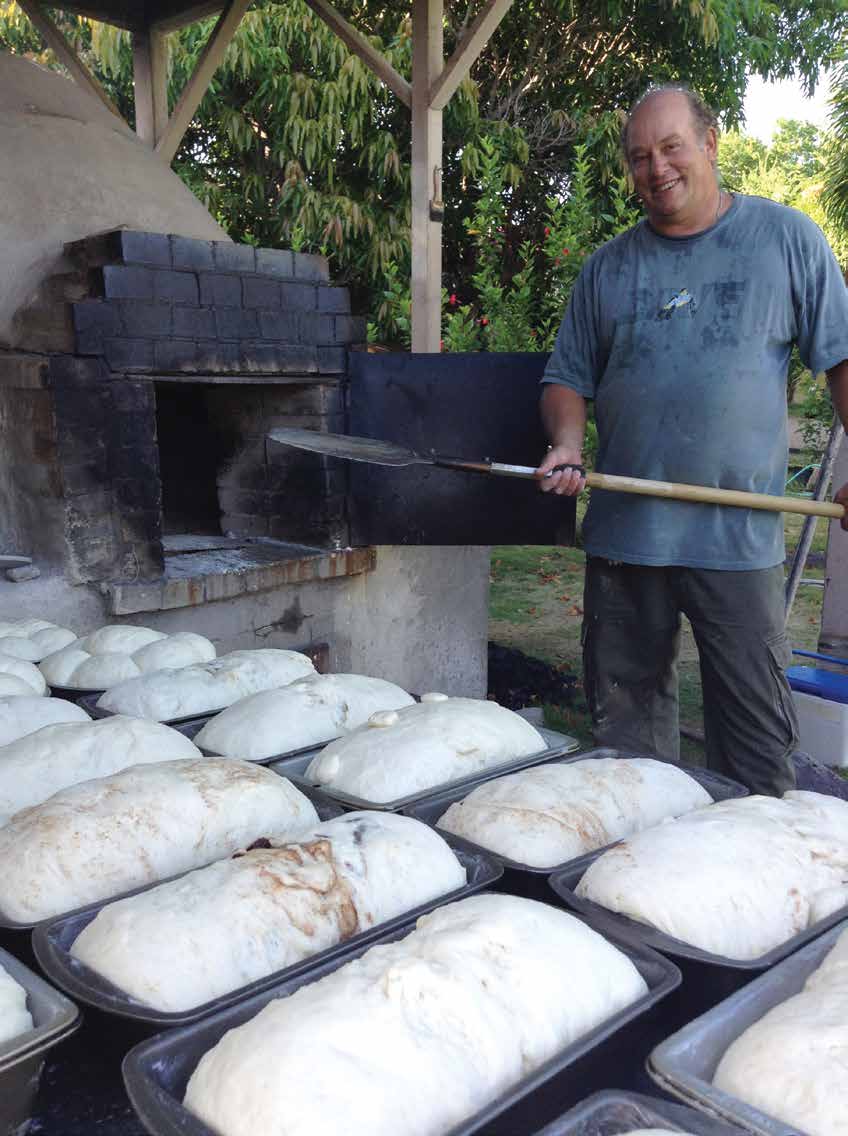 The first hot loaves are ready to remove within 15 minutes. The oven workers line them up on a contraption built from an old gurney with wheels recycled from a wheelchair and a wheelbarrow. Carrying 15 cinnamon loaves and 15 seven-roll pans to the recreation area, the gurney is unloaded onto cooling racks.

The workers slice into a “sacrificial loaf” that is less perfect than the others, a reward to enjoy with a fresh cup of coffee and a scoop of homemade jam. It’s a pleasant morning, as customers come to pick up the loaves they’ve preordered and members take time to relax and talk story.

In addition to supporting Club scholarships and activities, proceeds will help care for the Heritage Gardens casa, where the Club meets monthly and holds an annual Festa every May to celebrate Portuguese culture and traditions – a celebration that goes to the heart of the Club’s purpose.

President Paresa descends from both Madeira and Azores immigrants . She joined the club in 2004 after a life-changing trip to the Azores. “The enormity of Portuguese customs and traditions lost in subsequent generations born in Hawai‘i was obvious from the moment we stepped off the plane in the Azores,” she states on the Club website. “In a land of easy, laid-back, simple lifestyles where faith in God is the priority, I found myself to be far more American in culture than Portuguese.”

“We really lost a lot,” Paresa says of the changes since the Portuguese arrived in Hawai‘i. By the time Paresa asked her grandmother to teach her to pray the rosary in Portuguese, plantation-boss suppression of the culture had been internalized. Her grandmother refused, saying,“You are an American.” Today, says Paresa, Islanders of Portuguese descent tend to believe “Portagee jokes,” knowing little about their culture’s richness or about Portuguese explorers who headed bravely into an unknown world—Columbus, Magellan, da Gamma. “I’m learning through this club so we can bring back some of this culture.”

So while the club uses its well-known and beloved food to support its efforts, its goals reach far beyond savory soups and sweet breads to restore a people’s history. At each meeting of the group at the Heritage Gardens casa, they begin by praying as their ancestors did—in Portuguese. 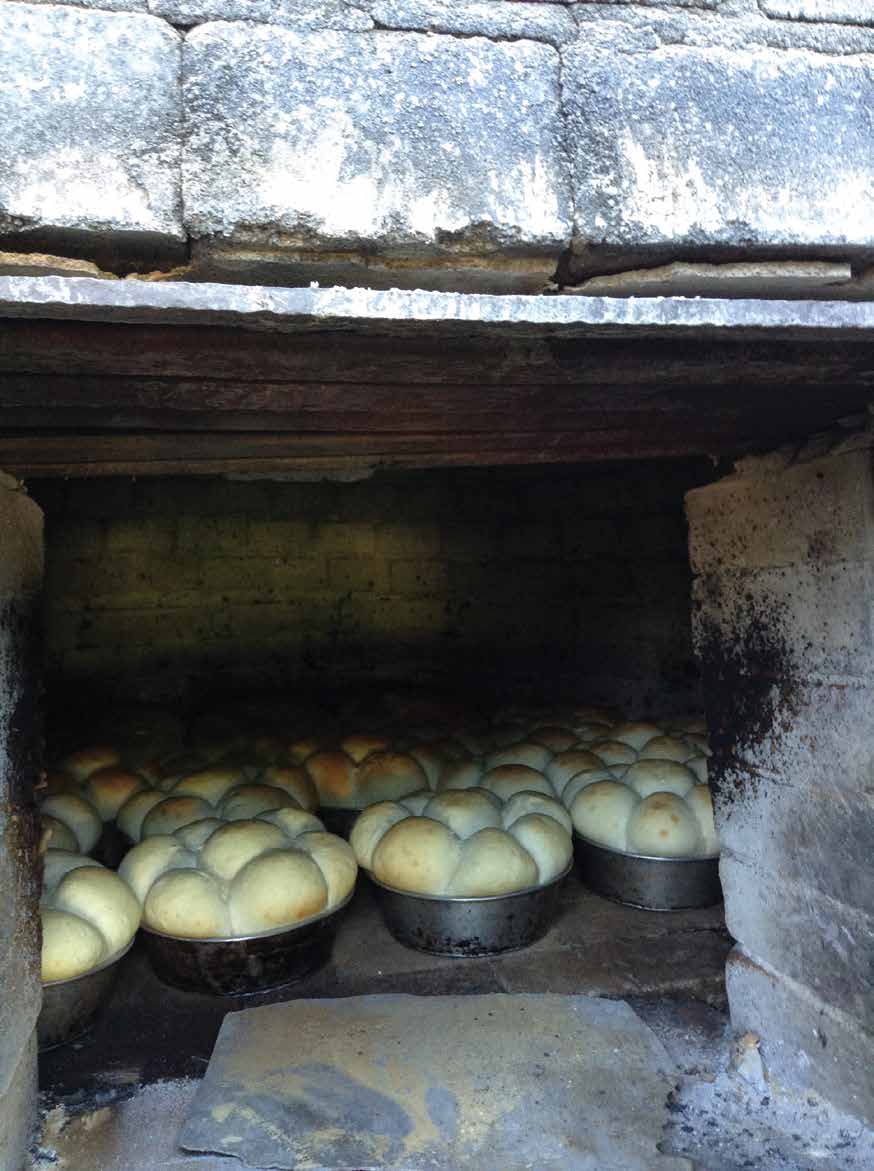