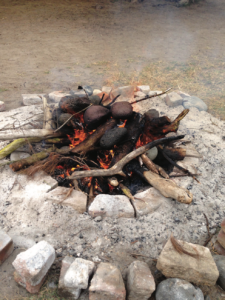 WRITTEN AND PHOTOGRAPHED BY SHANNON WIANECKI

According to Hawaiian lore, the demigod Maui and his brothers were fishing off of Kaupō when they first discovered fire. They caught a whiff of something unfamiliar and irresistible: the smoke of roasting bananas. Maui followed the scent and found a flock of ‘alae ‘ula (mudhens) gathered around a fire. He pestered the birds until they surrendered their secret and showed him how to rub dry sticks together to spark a flame. Harnessing fire is one of humankind’s greatest achievements. Cooking with fire is a powerful, universal ritual that reaches across time and space to connect us with one another and our ancestors. In Hawai’i, that connection finds its fullest expression in the imu, or under-ground oven.

When Polynesian voyagers first arrived in the Hawaiian archipelago, they brought their cooking traditions with them. Literally—their canoes carried pigs, chickens, breadfruit, taro, and sweet potatoes. Over time, the first Hawaiians developed culinary customs unique to these Islands. They sun-dried, salted, pounded, and fermented their vegetables. They pressed oil from kukui and coconuts and roasted reef fish over flames. But when it was time to really cook, to prepare the nourishing and resplendent feasts they are famous for, they turned to the imu.

Traditionally, Hawaiian homes had two imu, one for men’s food and one for women’s food. Priests also maintained ceremonial imu for offerings to the gods. Everything was cooked in the imu: whole pigs, dogs, chickens, fish, and all varieties of fruits and vegetables. Creative chefs mixed limu (seaweeds) with meats to make savory jellies and gravy.

In modern times, imu are reserved for special occasions: weddings, a baby’s first birthday, and other celebratory lū‘au. Growing up in Hawai‘i, I’ve enjoyed countless plates of succu-lent kalua pig pulled from the steaming pit in the ground. (Kalua literally means “the pit.”) But I had never helped build an imu, until my friend Calvin Hoe volunteered to teach me. His family runs the Waiahole Poi Factory and Hakipu‘u Learning Center on O‘ahu. There, he teaches students how to cook traditional Hawaiian foods during school campouts. He loves to make imu anytime, regardless of the occasion.

I soon learned that building an imu is a collaborative event that lasts hours, even days. A solid work crew is essential, so Calvin invited two friends to help, Chris Ikaika Naka-hashi and Randy Griebenow. Chris works for the state repatriating Hawaiian iwi, or skel-etal remains. He built his first imu at Hakipu‘u Learning Center and has since built many regular and ceremonial imu. Randy is just an all-around helpful guy. We were off to a promising start.

Our preparation began days in advance, with the search for an appropriate site. “An imu pit should be dug close to where the food will be served,” Calvin told me. “Using an exist-ing pit is best, less work.” Plus, like all cooking sites, an imu collects the mana (spiritual power) of the food and the chefs. That mana passes on to future feasts. Scott Fisher at the Hawaiian Island Land Trust graciously allowed us to use the imu at the Waihe‘e coastal refuge. When we inspected the pit, however, it was overgrown with grass and far too large for our needs. Instead of spending hours reshaping it, we opted to repurpose a nearby campfire. We pulled the circle of bricks back to roughly six feet in diameter. Presto: a tidy, ready-made imu pit. 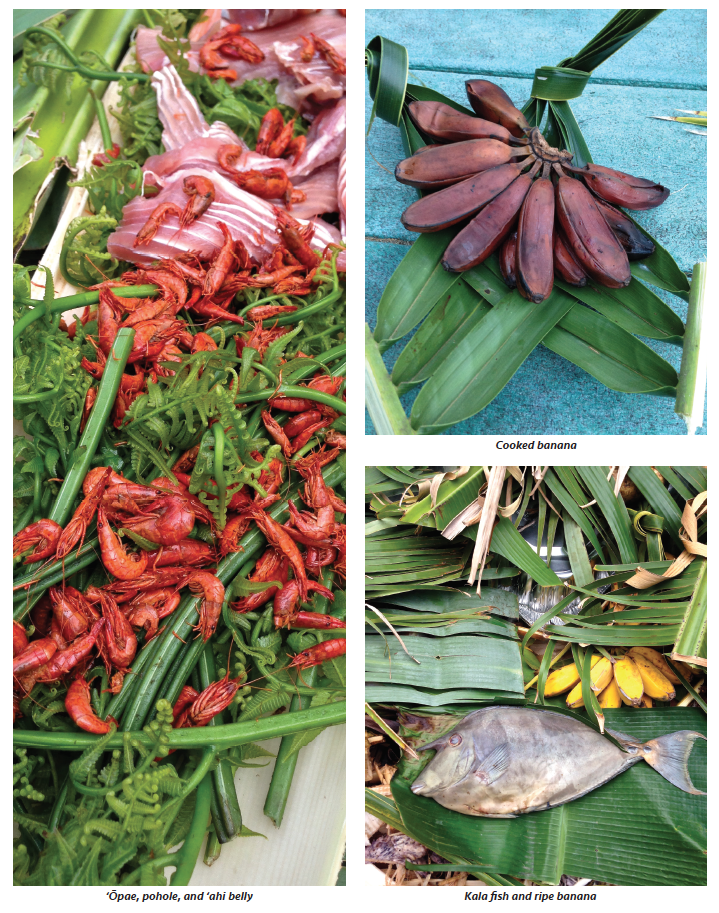 Meanwhile, we had been busy gathering supplies. On our way to Waihe‘e, we collected tī leaves, coconut fronds, and banana stumps. Tī is thought to ward off negative energy; it’s also an all-purpose kitchen tool. Waxy, waterproof tī leaves serve as wrappers, baskets, ties, and clean surfaces to prepare and serve food on. To this day, Hawaiians plant tī liber-ally around their homes and outdoor cooking areas.

Other essentials were readily available at Waihe‘e: firewood and round lava rocks. Chris showed me how to select prime “puka-puka” rocks. Puka-puka rocks are porous with lots of small holes. They hold the heat of the fire, while dense stones often explode, sending dangerous, red-hot shards flying. We piled several dozen large puka-puka rocks near our pit, along with stacks of dry driftwood.

Calvin bundled some dry, brown coconut fronds together to use as kindling. The salty breeze battered his little flame, which grew as we fed it shredded coconut husk and small twigs. Once a few large logs were burning, we added our puka-puka stones to the fire and let it burn for the next three hours.

Next came the fun part: mashing the banana stump. That morning we had whacked down a tall banana tree in my backyard. Now we split the oozing, heavy trunk into chunks and laid the pieces onto a clean tarp. Using a driftwood log as a mallet, we took turns pulver-izing the stump. “Be careful not to get any dirt or sand onto the banana,” Chris instructed. “This is our cooking surface.”

With the banana prepped, we turned to the coconut fronds. Calvin demonstrated how to split a frond in half and weave sections into plates. By the time we had a stack of mu-seum-quality platters, three hours had passed and it was time to tend our fire. The wood had burned away, leaving behind red-hot rocks. Using shovels, we carefully removed any still-burning charcoal. We shifted the rocks around until they formed a relatively smooth, flat surface and spread the banana pulp evenly on top. Banana fiber is full of liquid. Placed on the hot rocks, it exuded a fragrant steam that would soon permeate our food.

Finally, it was time to cook. We had a wealth of foods gathered island-wide: pork, chicken, a whole kala fish, filets of ‘ahi and salmon, sweet potatoes, beets, and some ‘ōpae (fresh-water shrimp) mixed with pohole fern. Randy contributed two huge pork roasts and Chris brought Hawaiian bananas and breadfruits. We arranged everything on our woven plat-ters, covered them in tī leaves, and let Calvin place each item where it would cook best: meats in the center, bananas and ferns tucked into the edges.

“This is the most diverse imu I’ve ever seen,” Chris said of the colorful assemblage. Calvin noticed my impressed stare and laughed. “In our tradition, you don’t prepare just enough food. It’s bad manners if you run out. People remember. So you always put extra food in.” 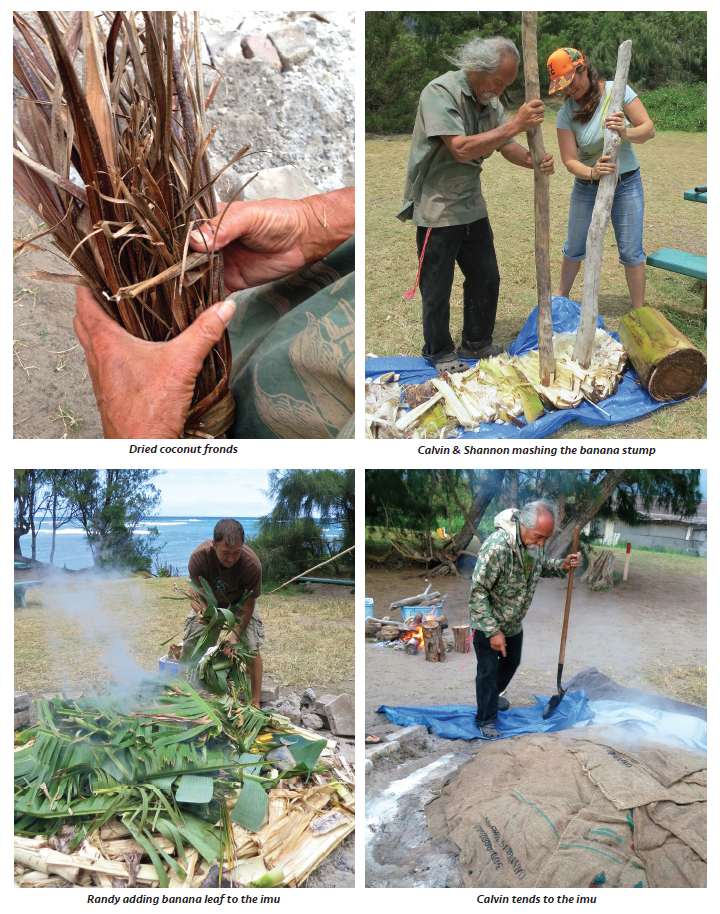 We began to close our imu, first covering the food with wide banana leaves. Next we dipped burlap sacks in water and laid them down methodically, closing any gaps where steam could escape. We covered the sacks with two large tarps and sealed the edges with rocks and sand. An imu relies on the radiant heat of the stones, steam, and pressure to cook food over several hours. It’s extremely efficient, using few resources for maximum benefit. Leaning on our shovels, we admired the compact mound. Aside from a few modern assists—burlap sacks and plastic tarps—our imu was identical to those built many centuries before. Now, our job was to wait.

“Making an imu is an art,” Calvin said. “You’ve got all these things happening. It’s too hard to control the temperature and timing. Four hours is the minimum. Any less and the taro will be mane‘o [itchy in the mouth] or the pork won’t be cooked.”

Chris nodded. “Eighteen hours isn’t too long,” he said. Unless you fail to remove all of the burning embers before sealing the imu, that is. That happened once on Kaho‘olawe, he heard. The guy in charge didn’t know what he was doing and when they opened the imu, everything inside was black charcoal. Inedible. “So many things can go wrong; there’s so much pressure on whoever does the imu.” When Chris finds himself in charge, he laughs, “there’s a lot of prayer.”

With nothing else to do, we peeled off our smoky clothes and jumped into the ocean. Five hours later, the anticipated moment arrived: time to open our imu. “I hope it’s edible,” Calvin teased. We had invited friends and family to join our little lū‘au, and they helped shovel away the sand and rocks and pull back the tarps. One by one, we lifted each coconut platter from the steam and set it on the picnic table. By now, the sun had set. Our glorious feast would be enjoyed in the ebbing light of the day.

Despite Calvin’s warning, everything was perfectly cooked. No one could stop commenting on how juicy and delectable the food was. The sweet potatoes were like candy. The bananas turned dark red, and the flesh inside bright pink. The pork had melted into shreds. We hadn’t seasoned the food with anything other than sea salt, but the natural flavors were pure and potent. The beets were Cal-vin’s experiment, and they were a surprise hit. My favorite was the crunch of the salty ‘ōpae nestled in the earthy ferns.

Few things rival the deep satiation of meal shared with real aloha. As I ate, I felt great gratitude to Calvin for sharing his knowledge, to Chris and Randy for sacrificing an entire day to help cook, to Scott for allowing us the space, to all of the plants and animals we consumed, and even to the fire itself.