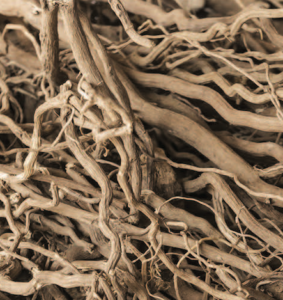 `Awa was one of the original canoe crops brought to Hawai`i in sailing canoes by the earliest Polynesian voyagers. The word `awa (pronounced ah-vah with the “w” as a “v” sound) means “bitter.” A member of the pepper family, the plant grows well at low ele-vations where there is constant moisture and partial sun. Though it now can be found growing wild, it is also cultivated throughout the Pacific Islands, where it is called Kava or Kava Kava. More than a dozen varieties of `awa were known in old Hawai`i.

`Awa’s roots – as well as its leaves, stem and bark – can be used medicinally to treat the following maladies: general debility, wea-ry muscles, chills, colds, headaches, lung and other respiratory diseases such as asthma, displacement of the womb, diabetes, congestion of the urinary tract, and rheumatism.

`Awa is used principally as a sedative to induce relaxation and sleep, and is especially potent in combination with lomi lomi massage. It is also used as a tonic when people feel weak, as it is stimulating and refreshing, unless drunk in large quantities. Over indulgence in `awa can adversely (but temporarily) affect the skin and eyes.