Few articles of clothing have the metaphoric weight of an apron. Aprons embody deep nurturing and domesticity; their strings are the ties that bind us to our mothers. They also represent the muscular skills and unsung efforts of the working class. Tying on an apron announces your readiness to work; taking it off says you’re finished for the day.

In the kitchen, an apron is a versatile tool: it protects against oil spatters, sudden spills, and brushes with sharp edges. It’s used to retrieve hot pots from the stove, carry warm baguettes or bundles of firewood, and dry wet hands or the occasional tears. Farmers’ aprons swaddle frantic chickens on the way to slaughter and cradle fresh laid eggs. Aprons put out fires, sop up messes, soak up sweat, and, at the day’s end, stink to high heaven.

The humble apron has a hefty job. Since its emergence in the Middle Ages, this small scrap of cloth has served the needs of cooks and artisans of every stripe. The earliest aprons appear in Renaissance paintings: lengths of homespun linen tied around the waists of bakers and bean sellers. Back then working people possessed just one set of clothes. They needed to protect their garments with something that could be easily washed or replaced. Over several centuries and across diverse cultures, aprons of every imaginable material emerged to meet multiple needs.

In 14th century Japan, fishermen fashioned maekake, half aprons, out of recycled canvas sails. The most entrepreneurial fishers painted their company’s logo onto their repurposed protective gear. The practice spread and soon Japanese rice, sake, and lumber merchants sported beautiful silkscreened maekake that doubled as advertising. In the 1800s, tube-shaped Scandinavian aprons called barvells were standard issue for fisherman, pork packers, tanners, oystermen, and any class of bench workmen exposed to hot or cold temperatures, water, oil, and chemicals. Blacksmiths climbed into oiled leather aprons stiff enough to stand on their own, while butlers and maids pinned starched white bibs atop their spotless uniforms.

Through the 1900s, aprons began to take on a feminine hue, symbolizing motherhood and all of its trappings. Sure, construction workers continued to stuff nails into the pouches of their Carhartt duck aprons—but most people began to associate “apron” with stereotypes of the fairer sex. 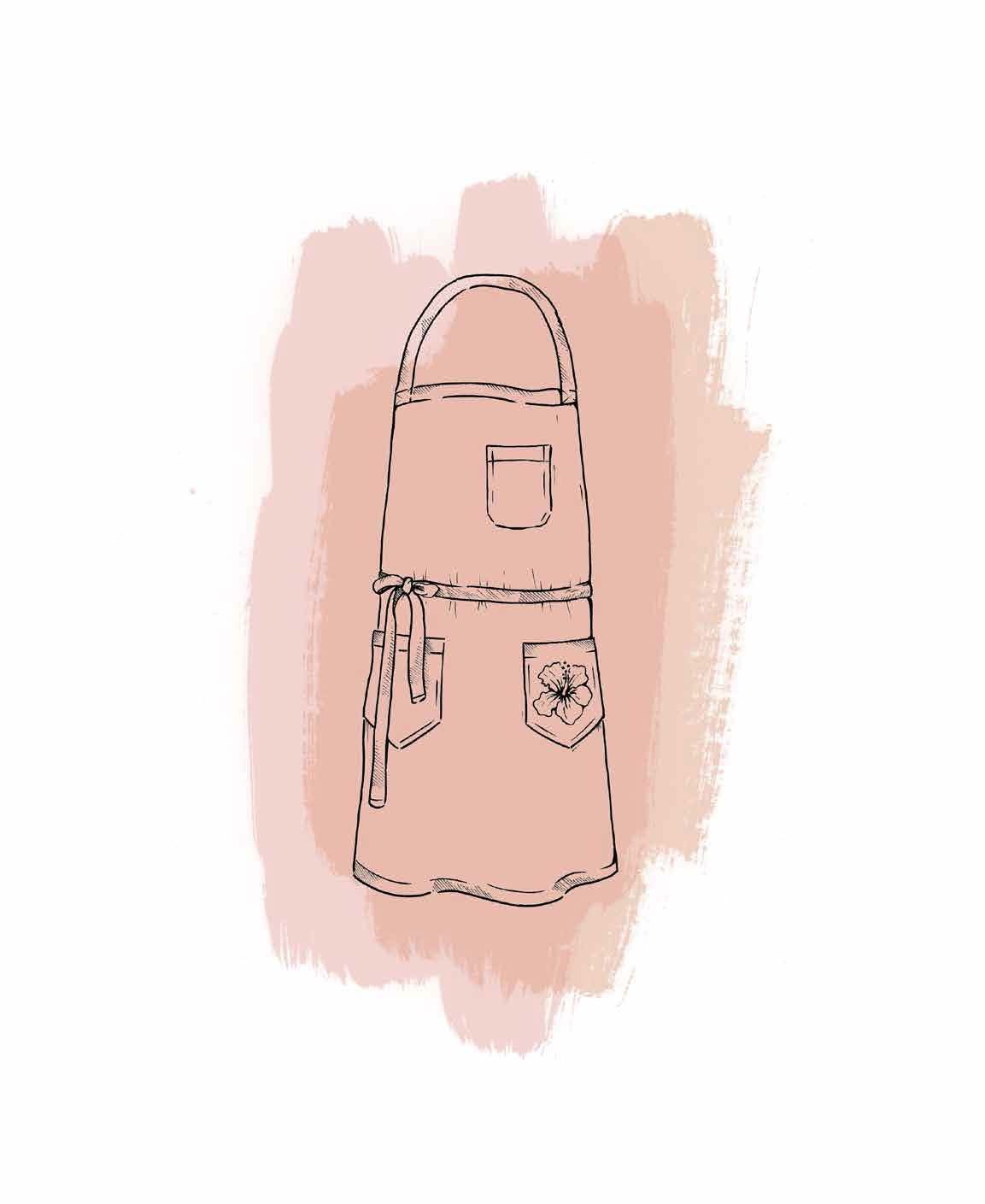 In between cleaning and feeding babies, housewives gave vent to latent creativity by lavishing plain cotton rectangles with embroidery or lace. Mothers, aunts, and sisters handed these decorative heirlooms down through generations. The Great Depression inspired further resourcefulness; thrifty homemakers recycled flour and seed sacks into aprons. By the 1950s, TV moms such as June Cleaver, Lucille Ball, and Mary Tyler Moore paired their smart-looking aprons with pearls. Apron fashion peaked in this era: kitchen cupboards overflowed with inventive kitchen wear ranging from calico to chiffon, ruffled or Spartan, utilitarian or elegant. A typical apron collection might include a patchwork smock pieced together from vintage remnants and a frilly, backless satin number to be worn over a cocktail dress. The variety of patterns, fabrics, and embellishments was endless.

Meanwhile, in the professional kitchen, chefs dressed as drones. For nearly two hundred years—thanks to a stuffy Frenchman—international masters of cuisine have worn identical outfits: double-breasted white jackets, houndstooth pants, and tall, pleated toques. This classic kit denotes cleanliness, professionalism, and rank in the kitchen. The taller the toque, the bigger the paycheck.

For many modern cooks, the de rigueur uniform has lost its appeal. It seems affected, showy, or just too darn hot. As celebrity chefs began stepping into the spotlight, a few broke tradition and wore (gasp!) bright-colored coats or hot chili pepper pants. But the majority of the kitchen staff was stuck wearing drab white aprons with straps that frayed after a few washes.

In 2012, a line cook finally had her fill of substandard apparel. “I was tired of wearing a shitty apron every single day,” says Ellen Bennett. “The straps hurt your neck. The fabric wasn’t breathable. The pockets weren’t useable. I knew I could make something better.”

Bennett launched a custom apron company, Hedley & Bennett, and sparked a new trend. She sourced fabric from around the world—European linen, Japanese selvage denim, and Italian chambray—to create functional, fashionable kitchen gear. Her chef friends snapped up the prototypes and now she has a team of twenty sewers to keep up with demand. They produce 2000 units a week, each one dyed, cut, and stitched together in Los Angeles. Detail-oriented chefs appreciated the extras: brass hardware and chest pockets for sharpies and tweezers.

“We’ve worked really hard to make sure [the aprons] hung and fit just right and that we had options for people who are taller or who want something that doesn’t come down quite as far on their legs,” says Bennett. “I listen when chefs come to the office and say ‘I wish you had an apron like this.’ I use those ideas to make our aprons better.”

On a Chef Near You:
look for the sassy new collaboration between Hedley & Bennett and edible Hawaiian Islands. The limited edition apron features “a little island flare mixed with Hedley & Bennett’s classic style.” 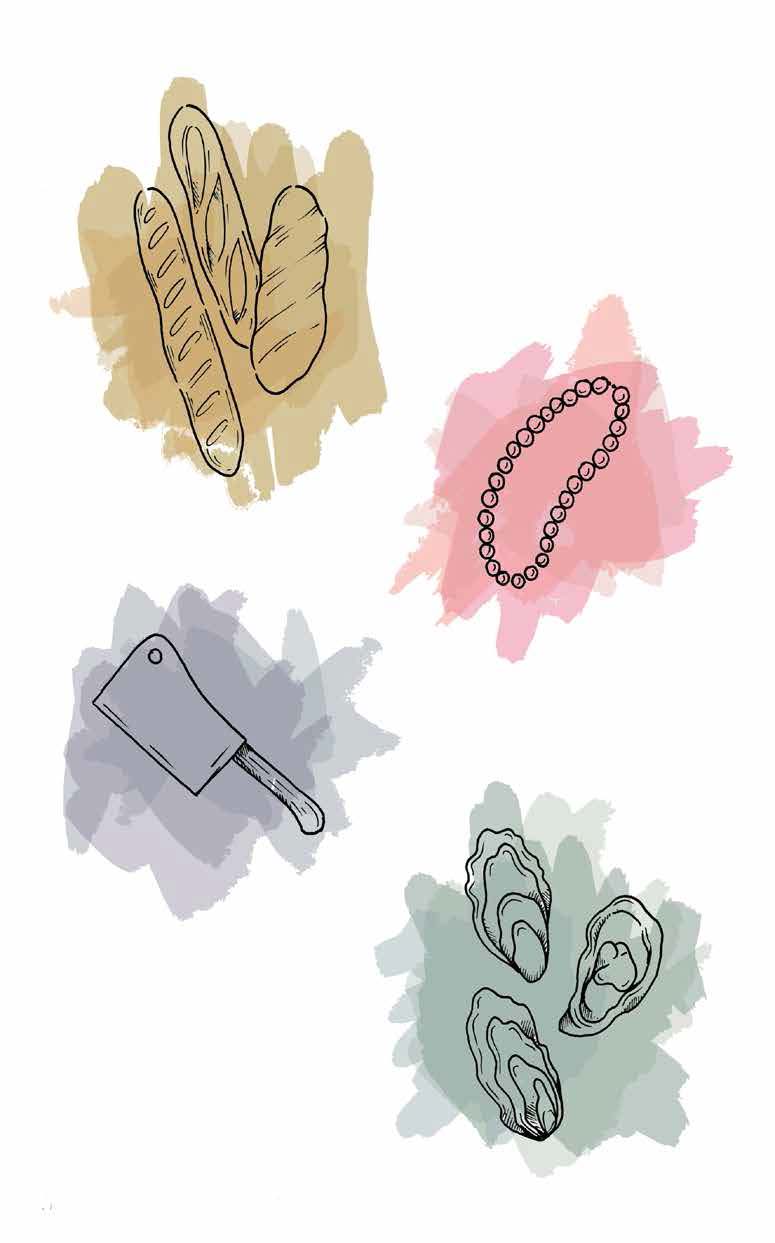 Thanks in part to her efforts, today’s top chefs are ditching coats for designer aprons. Her “Apron Squad” includes David Chang of Momofuku, Mario Batali of Babbo, Nobu Matsuhisa of Nobu’s, and Naomi Pomeroy of Beast. A recent collaboration with photographer Gray Malin resulted in “Nude Beach” –a limited edition apron printed with an aerial photo of nude Barcelona beachgoers.

Perhaps the old guard would wince, but Bennett is clearly on the cutting edge—and she isn’t alone. Blunt Roll, a Toronto-based company, turns out longwearing aprons that chefs salivate over. Made with supple leather, they feature pockets that double as a knife roll. Pastry chefs dressed up in white cowhide don’t have to worry about streaks of flour diminishing their style quotient. Blunt Roll’s “Mutha of all Shuckers” apron even comes with a special holster for an oyster shucker.

“There has definitely been a change in kitchen attire,” says Sheldon Simeon, executive chef at Migrant on Maui. “Chefs are wearing coats less, turning to teeshirts or button downs with stylish aprons. Right now I am on a rotation of aprons made by Hedley & Bennett and Annie Apron.”

The latter sells strictly by word of mouth. Simeon heard about them from his pal, Jeff Scheer of The Mill House at the Maui Tropical Plantation. Who is Scheer’s secret source? His mom. Ann Hobstetter starting outfitting her son and his friends about a year ago. She took time finding the right fabric. “Nothing too heavy,” says Scheer. “The kitchen’s hot. But not too light or it won’t last.” Hobstetter settled on a soft denim, which she equipped with pockets for tweezers and rags. “I think it’s the perfect apron,” says Scheer. Naturally—apron strings are strong indeed. But his style-conscious friends are big fans, too.

“I constantly get compliments on [Annie’s] aprons at events,” says Simeon, who regularly travels as an ambassador of Hawaii’s ripening food scene.

For some, even this new, pared-down kitchen uniform can feel overdressed. In a moment of post-shift frivolity, chef Mark “Gooch” Noguchi of Mission Social Hall & Café convinced a handful of his colleagues to shuck their clothes for an aprons-only impromptu photo shoot. The risqué trend took on a life of its own. If you dare, search the #nakedapronseries hashtag on Instagram or Twitter to find Hawaii’s celebrity chefs posing half-clad in various kitchens and outdoor locales. Don’t worry—it’s safe for your workplace, if not theirs. 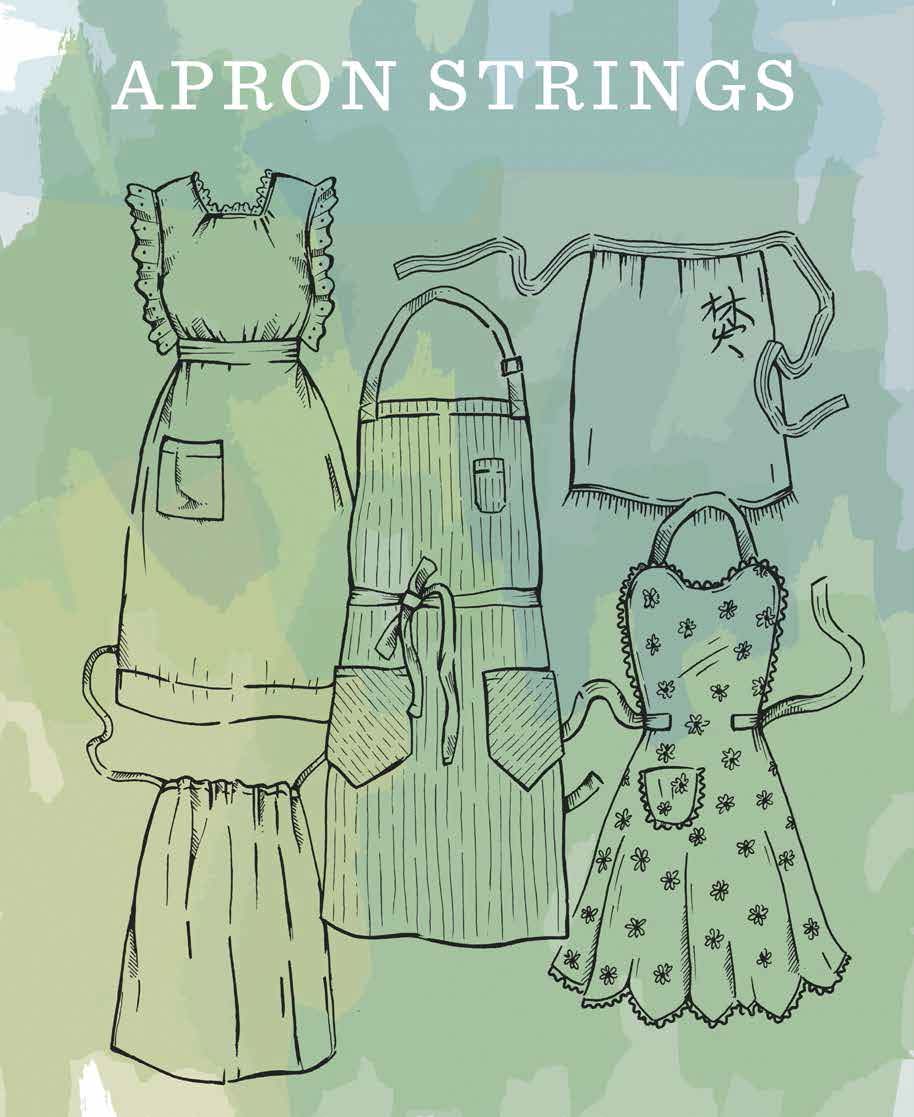