In a jingle, the classic American burger sounds simple enough, but look under the hood of this cultural archetype and be prepared to gaze into the abyss.

Although the fundamental ingredients of a burger are fairly standardized, the seemingly infinite possibilities within those categories prove otherwise.

Let’s begin at the beginning.

When cross-examined about the components of the “perfect” burger, five chefs and one rancher chimed in… with six notably individual responses.

“The meat? That would be venison from Moloka‘i or L–ana‘i, for sure. Ninety percent lean and only cooked medium rare. Pan fry it in vegetable oil on high heat to get a nice sear.”

“Absolutely, positively cooked on the grill to medium-well,” countered Hawai‘i Island’s Blue Dragon Executive Chef Noah Hester. “You’ve got to get that charred grilled flavor and to do that, you have to really cook it. With rare or medium rare, you don’t get that flavor I associate with a hamburger.”

Empowered with the knowledge that the perfect patty is made with beef (or venison), grilled or pan-fried and cooked anywhere from medium-rare to medium-well, well, we moved on.

“The most popular commercial burgers are the Big Mac or In-N-Out with Animal Sauce.To cover all those bases, we make a custom sauce with mayonnaise, ketchup, Dijon mustard, pickle relish,Tabasco,Worcestershire, salt and pepper,” explained Hester.

“My first burger was from the Like Like Drive Inn on Ke‘eamoku Street in the early ‘60s,” recalled Edwin Goto, chef and owner of Waimea’s Village Burger. “It had a thin patty, sesa- me bun and this mustard-ketchup-mayo concoction slathered on the bun.This was a long time ago, but I still recall how I loved that mustard- ketchup-mayo thing!”

“With a little bit of ketchup on the patty and some mayo on the top bun, you have a well-oiled machine,” noted Halpern.

“I’ll never forget my mom’s hamburger patties with Campbell’s cream of mushroom gravy and some ketchup on the side,” shared Abarcar. “Mean! My mom never drained the drippings and oil from the pan before she added the soup, so her gravy was intensely beefy.” 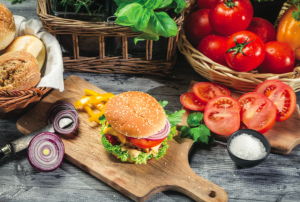 Toppings. Surely there will be a quorum on the topic of toppings.

“If we’re talking about the quintessential American burger, you can’t mess around: the bacon, the glistening onions and the cheese, pickle, tomato, lettuce. It’s classic,” Hester explained.

“Local tomatoes and butter lettuce are essential,” agreed Chris Damskey, Chef de Cuisine of ‘ULU Ocean Grill at Four Seasons Resort Hualalai,“but lately I’ve been getting into using kama‘–aina pipikaula or dried aku, so long as it’s not too strong.”

“You start with green leaf lettuce, which should be a little bigger than the patty and a thick slice of tomato,” Halpern elaborated.
“Good lettuce, vine-ripened tomatoes and sweet onions,” Abarcar chimed in. “The cheese would be Vermont cheddar or Gruyère for the flavor and the melt quality. Or Roquefort be- cause of its slight twang and smoky finish.And I like to have an egg, as well, for the added ‘sauce.’”

“The bun, to me, is really, really important,” Hester weighed in. “A lot of people are using the brioche bun, which I can’t stand. I think it’s too soft and mushy.

“Our baker is doing a focaccia with steamed potatoes and sau- téed onions into the dough. It has this really light, airy center, but the ‘skin’ of the crust creates a pocket to trap all the juices and the ingredients inside. It’s a love pocket.”

“The only thing I’m particular about is the meat. I’m prejudiced and only eat my own, because I know it’s 100 percent grass-fed,” he noted.“We’re the only certified grass-fed cattle ranch in the state of Hawai‘i, meaning grass is the only thing the animals have ever eaten.

“Fire up the propane grill and cook it to medium,” Sakata added.

One thing is abundantly clear:The perfect burger is a uniquely personal.

Although the quality and freshness of the ingredients is clearly important, how those items are prepared and assembled seems to come down to an unexpected common denominator.

“Where I grew up – in the Midwest, in Minneapolis – we didn’t have a grill,” Damskey recalled. “Burgers were seared in a pan, and I still like them like that, with kind of a hard crust on them. It reminds me of home.” 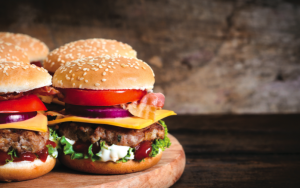 “The best burger I ever ate,” reminisced Goto, “was one my mother cooked for me at 10 years of age. Store bought 80/20
ground beef mixed with chopped onions, salt, black pepper and a whole egg. Hand-shaped, seared on a heavy black skillet and served between white bread slices slathered with Best Foods mayonnaise and packed in a waxed paper sandwich bag.”

“My first burger was made by my friend’s grandma, and I have often tried to duplicate it,” Halpern shared. “It was a mixed patty with relish, green peppers, sugar and soy. She used a soft bun, probably from Love’s Bakery, and it had a Thousand Island-type sauce on it. I still think about it 30 years later.

“Environment and mood often dictate my memories of food,” he continued. “My friend’s grandma was one of the nicest ladies I ever met, and once I ate that burger I knew it was special because she made it. Her love was evident.”

“I don’t know if it’s that first hamburger you ever have or if it’s that blend of the people and the place and that time in your life,” Hester summarized.

“Everyone is always searching for that perfect childhood ham- burger. You can get close to it, but you can’t ever repeat it.”