LETHA THOMAS, owner of Monkeypod Jam on Kaua‘i had been trying to get meetings with O‘ahu buyers for years. Then in January 2018 her company was selected to be in Mana Up, a Hawai‘i-based business accelerator program.

“I was able to get in front of buyers I had been trying to get a meeting with for years,” says Aletha. “Mana Up has the connections I needed. We’re getting to the point where we think we’ll double our sales [by this time next year] and part of that is due to the connections and education we learned from Mana Up.”

“You go into it wanting more sales, but it’s also about getting more organized and making sure you are more strategic in your decisions for the future,” adds Kimo Tuyay, co-owner of Maui Nui Venison, which makes venison jerky from invasive Axis deer humanely harvested on Maui.

These days small business owners like Aletha and Kimo can use all the help they can get when it comes to launching and scaling a business in the aloha state. Last year Hawaii ranked last nationwide for starting a business, according to a 2018 WalletHub study. Local businesses creating agricultural related products, which rely on fishing, ranching, and growing produce, face even greater challenges because their products are subject to the whims of Mother Nature and other external factors.

Launched in 2017, Mana Up was created with the ambitious goal of helping to create Hawai‘i’s next 100 product companies earning more than $10 million in revenue—all based in Hawaii. Mana Up does this through a 12-week accelerator program geared specifically for Hawaii-based companies by helping businesses with marketing, distribution, branding, scaling, and much more.

Cofounders Meli James and Brittany Heyd both have extensive backgrounds in the venture capital world and bring substantial, high-level contacts and partnerships to the program. Prior to launching Mana Up, Brittany, who is a lawyer, worked in the Obama White House on public policy and was managing director of 1776, a Washington, D.C.-based global venture capital fund.

Meli previously served as the head of new ventures at Sultan Ventures and program manager of XLR8UH, a nationally recognized startup accelerator run by the University of Hawai‘i. In addition to managing Mana Up, Meli serves as the president of the Hawai‘i Venture Capital Association.

According to Meli, the accelerator program helps Hawai‘i companies become global companies, while at the same time bringing to the world what really makes Hawai‘i special.

Companies that apply to Mana Up must meet certain requirements, such as having a minimum of $100,000 in annual revenue, plans to scale beyond Hawai‘i, having a Hawai‘i-based founder and company, and a deep connection to the aloha state. 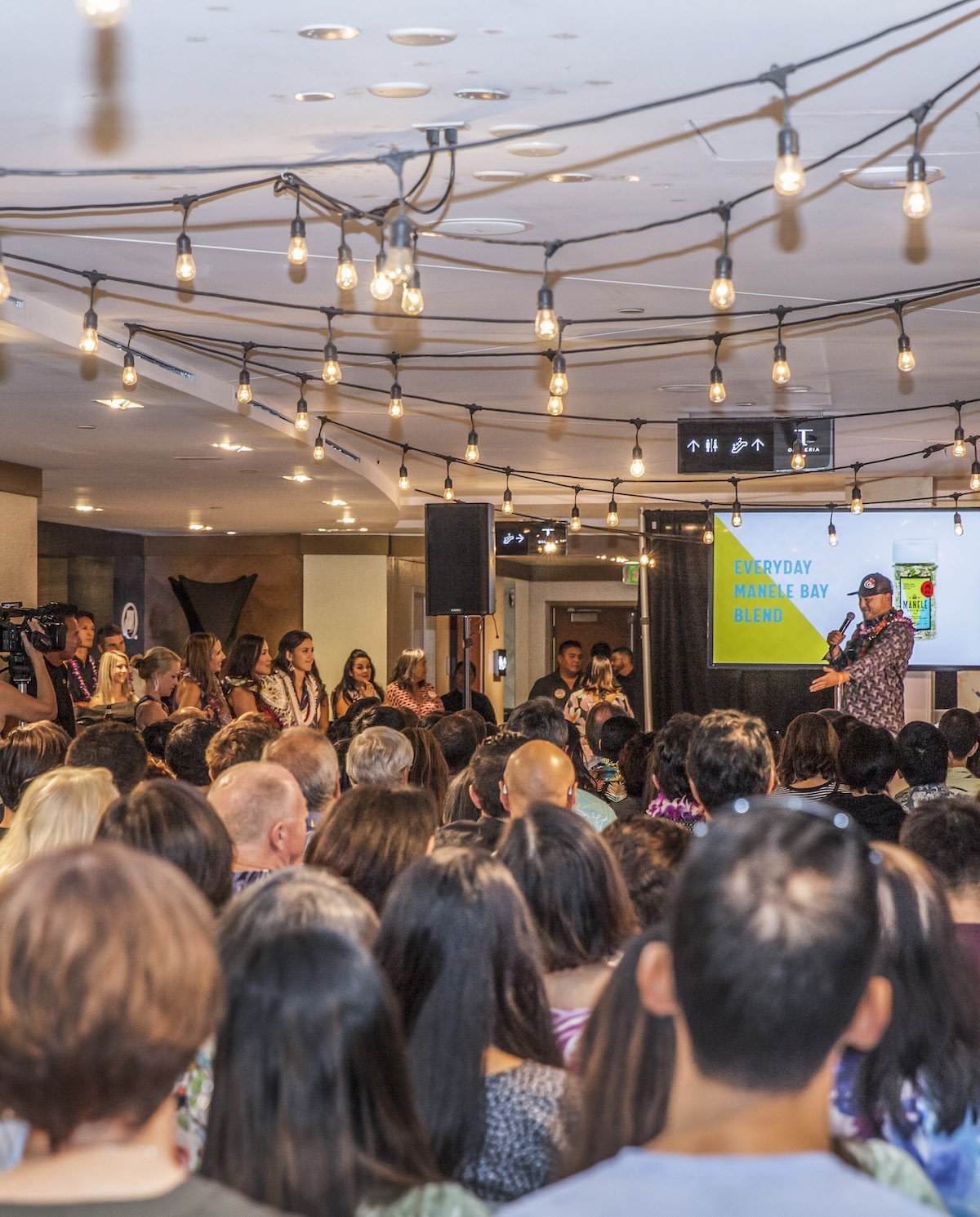 Businesses from a range of industries, including apparel, jewelry, packaged food, alcohol, health and beauty, and more can apply to the Mana Up program. Cohorts are typically held twice a year and competition can be fierce. Of the 85 companies that applied to the first cohort held in January 2018, only 10 were chosen.

When it comes to selecting finalists for the cohort, Meli says the Mana Up team “looks at what the company is sourcing and if they are doing it sustainably.” Equally important she says, Mana Up looks at a company’s story and connection to the islands. “Are they sharing that narrative with both visitors and residents of Hawai‘i who can learn something new?”

Of the 31 companies that have participated in the three cohorts to date, 13 are food related businesses sourcing locally farmed or ranched food in their products. Ag-based companies in the cohorts include Manele Spice company, which sources Hawaiian salt from Moloka‘i, Kōhana Rum and Hawaiian Rainbow Bees, both based on O‘ahu, as well as Hawaiian Vanilla Company and Big Island Coffee Roasters, both on Hawai‘i Island.

“They are pretty much giving you all the information you need to increase your sales from branding to advertising to online sales platforms to physical meetings with big buyers in the state of Hawai‘i,” says Dawn Kaneali’i-Kleinfelder, owner of Liko Lehua Gourmet Butters and Café. “What you do with that information is up to you.”

Those entrepreneurs fortunate enough to be selected for Mana Up cohorts are maximizing the opportunities the program provides.

“Manoa Chocolate has taken on a new merchandising opportunity with DFS Galleria with video and imagery instead of just being on the shelf,” says Meli, adding that more than 17,000 shoppers visit DFS’ flagship Waikīkī store daily where Manoa Chocolate has their new enhanced display. “Voyaging Foods, [from cohort 1], are now on the menu at the Kahala with their gluten free pancakes,” says Meli.

“With our partnership with Hawaiian Airlines we’ve been able to get these videos on the flights, which is great exposure for the companies,” says Meli.

“We could not have gotten that kind of awareness on our own,” adds Kunoa Ranch co-founder Bobby Farias. Kunoa Cattle has 4,000 acres of ranch land on Kaua‘i and O‘ahu, as well as the largest USDA-approved butchery for beef and pork on O‘ahu.

Being in Mana Up helped the ranch do more than gain exposure. Before participating in the cohort, Bobby says there was a misalignment between what he thought customers wanted and what products their target market actually wants. “Mana Up helped us with that.”

“Whether you are selling pies or steaks or rubber slippers, business owners are consumed with business problems, they don’t have the bandwidth to deal with branding awareness.

“I’m a rancher. My business is producing quality local beef in a sustainable way. Mana Up is forward focused on brand awareness. Connecting with them allows me to focus on what I do best.”

For other businesses involved in Mana Up, it’s not just about marketing, but also helping to scale their manufacturing so their business can grow.

“Working with Mana Up we get to work through our staffing and manufacturing issues,” he explains. “They help us line up all our manufacturing processes so that our products have the highest level of food safety and can be sold nationally and internationally.”

Then there is the intangible benefit of growing your business in Hawaii. Sheldon’s father first started making fish jerky more than 20 years ago in Kona. Now Sheldon is raising his kids in the same community where he grew up.

“I enjoy entrepreneurship and building a business,” he says, “but I also enjoy surfing and living in Hawai‘i and enjoying the beautiful place we live in. I love what Brittany and Meli are doing to help Hawai‘i have a more sustainable economy and helping local businesses survive here and thrive.” [eHI]